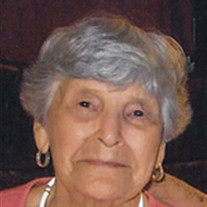 Adair Wilson Beattie, 93, of Chambersburg passed away on Thursday, December 17, 2015 at Village Square, Menno Haven. Born January 9,1922 in Dunmore, Pennsylvania, she was the daughter of the late Charles and Louise (Wagner) Wilson. Adair was a graduate of Dunmore High School where she had been captain of the Cheerleading Squad for 3 years. On February 5, 1944 Adair married Lieutenant Alexander Dawes Beattie of Chambersburg who had just completed his pilot's training in the United States Marines. Their first child, Alexander Jr., was born one year later while Alex was stationed in the Pacific. Adair and Alex enjoyed 69 years of marriage; always together, they were active in their church, in the Rhode River Yacht Club, Falling Spring Horse Valley Acres, several dance clubs, and in the lives of their children and grandchildren. Adair, who loved music, sung in the choir at Falling Spring for over 60 years. She was also an enthusiast equestrian, riding into her late 80. Prior to her marriage, Adair worked at the Scranton National Bank. She was a mother and homemaker until 1973 when she began a long career with the BonTon as the Estee Lauder Consultant, a position that she enjoyed immensely. Adair was preceded in death by her beloved husband, Alex, in 2013 and by their son, Benjamin Wilson Beattie, in 2011. She was also preceded in death by her 4 siblings: George Wilson, Victor Wilson, James Wilson and Barbara Wilson Leverich. She is survived by son, Alexander Dawes Beattie Jr. (Zan) and wife Alison, daughter Barbara Wilson Beattie, and daughter Adair Beattie Toddes (Bunny) and husband Steven. She is also survived by grandchildren Sarah Repucci and husband Demian, Jonathan Beattie and wife Jennifer, Timothy Peterson and wife Michele, Jessica Parker and husband Matthew, Emily Karottki and husband Salvador, Steven Toddes and wife Erin, Elizabeth Peterson, and Matthew Toddes. Also surviving are 8 great-grandchildren: Jackson Beattie, Elisabeth Beattie, Charlie Huff, Kian Peterson, Justice Repucci, Tess Adair Parker, Eloise Adair Toddes, and Alexander Karottki. Funeral services will be held at 11:00 a.m. on Saturday, February 13, 2016 at the Presbyterian Church of Falling Spring with the Reverend Andrew Hart presiding. A reception will follow in the Family Life Center. Burial will be private. In lieu of flowers, memorial contributions can be made to the Presbyterian Church of Falling Spring Choir, Presbyterian Church of Falling Spring, 221 Philadelphia Avenue, Chambersburg, PA 17201. To send flowers to the family or plant a tree in memory of Adair Beattie (Wilson), please visit our Heartfelt Sympathies Store.

The family of Adair Beattie (Wilson) created this Life Tributes page to make it easy to share your memories.

Adair Wilson Beattie, 93, of Chambersburg passed away on Thursday,...

Send flowers to the (Wilson) family.