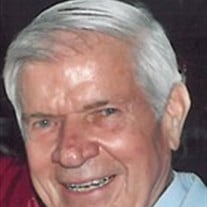 Alexander Dawes Beattie, 91, of Chambersburg, died Sunday morning, March 3, 2013 at Menno Haven. Born May 13, 1921 in Chambersburg, he was the son of the late Benjamin Myers Beattie, DVM and Clara Montgomery Beattie. Alex was a 1939 graduate of Chambersburg High School and a 1941 graduate of Mercersburg Academy. He attended Lehigh University but left to enlist in the U.S. Navy in 1942. He completed his cadet training in Chapel Hill, NC and was commissioned a First Lieutenant in the U.S. Marine Corps. During WWII Alex flew 40 combat missions in a F4-U Corsair with Marine Air Group 14 providing ground support in the Pacific. He was awarded the Distinguished Flying Cross and Gold Star, and he also received an Air Medal and eight Gold Stars. Returning to Chambersburg after the war he became a quality control inspector for the U.S. Air Force at the Fairchild Aircraft Corporation in Hagerstown, MD. In the early 1960's he began building houses in the Chambersburg area. Later, with his business partner, C. Jay Overcash, he began the development of Coldbrook Meadows. He served as President of the Franklin County Builders Association in 1967. He restored the log cabin near the site of Fort Chambers on W. King St. and built the waterwheel near the confluence of the Falling Spring and Conococheague Creek. Because of his deep commitment to the revitalization of Chambersburg, he was appointed in 1982 as Chairman of the Downtown Task Force. He also completed an early restoration of the Thaddeus Stevens Blacksmith Shop and helped maintain the property at Carrick Furnace. In 1989 he was honored as Preservationist of the Year by Franklin County Heritage, Inc. Alex was a Life Member and Post Commander (1956) of the American Legion Burt J. Asper Post 46. He was a lifelong member of the Presbyterian Church of Falling Spring where he served as an Elder. For nearly 60 years, he was a leader and advisor to Boy Scout Troop 127. A charter member of Falling Spring Horse Valley Acres, he worked tirelessly to preserve and maintain the natural beauty of the area. Alex was an accomplished pianist who enjoyed his Labrador Retrievers, his poker club, ballroom dancing, sailing on the Chesapeake Bay, and spending as much time as possible with his family. He is survived by his beloved wife of 69 years, Adair Wilson Beattie, and three children: Alexander “Zan” D. Beattie, Jr. ( Alison); Barbara W. Beattie; and Adair “Bunny” B. Toddes ( Steven); a daughter-in-law, Judy C. Beattie; eight grandchildren: Sarah Repucci (Demian), Lt. Cmdr. Jonathan Beattie (Jennifer), Timothy Peterson (Michele), Jessica Parker (Matthew), Emily Karottki (Salvador), Steven Toddes, Jr. (Erin), Elizabeth Peterson, Matthew Toddes; and five great-grandchildren. He was preceded in death by his son, Benjamin W. Beattie, and his sisters, Rachel Sullivan and Mary Kesler. A memorial service will be held at the Presbyterian Church of Falling Spring on Saturday, March 16, 2013 at 11:00 a.m. In lieu of flowers, memorial contributions may be made to Camp Falling Spring c/o Presbyterian Church of Falling Spring, 221 N. Main St., Chambersburg, PA. Online condolences may be expressed at www.sellersfuneralhome.com To send flowers to the family or plant a tree in memory of Alexander Dawes Beattie, please visit our Heartfelt Sympathies Store.

Alexander Dawes Beattie, 91, of Chambersburg, died Sunday morning, March 3, 2013 at Menno Haven. Born May 13, 1921 in Chambersburg, he was the son of the late Benjamin Myers Beattie, DVM and Clara Montgomery Beattie. Alex was a 1939 graduate... View Obituary & Service Information

The family of Alexander Dawes Beattie created this Life Tributes page to make it easy to share your memories.

Send flowers to the Dawes family.