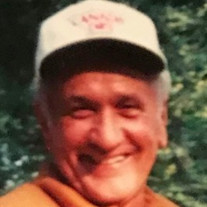 Anthony Martin Memmi, 86, of Chambersburg passed away on Saturday, March 30, 2019 at home. He was born November 11, 1932 in Three Springs, PA the son of the late Domenico and Grazia (Facchinei) Memmi. He was a member of the Corpus Christi Catholic Church. Tony graduated from Saltillo High School and then joined the U.S. Army, where he was in the famous 82nd Airborne Division. After his stint in the Army, he went to Shippensburg State College where he graduated with a B.S. in math. While attending college, he worked as an inspector for Fairchild Aircraft in Hagerstown MD. Tony began teaching math at Carlisle High School for a short time and then moved to the Chambersburg Area Senior High School where he taught math for 32 years. While teaching at CASHS he served as President of the Chambersburg Area Teachers Association. He was an avid golfer, card player and sports fan. He was a member of various clubs and groups including the Chambersburg Club, Elks Club #600, Charles Nitterhouse VFW Post #1599, American legion Post #46, Amvets Post# 224 and the Marine Corps Post #295. Surviving are his companion, Suzanne Pawson; two sisters: Dina Starliper of Mercersburg and Clementina Memmi of Chambersburg; two sisters-in-law’s: Lee Memmi of Bristol, PA and Miriam Memmi of Chambersburg and many nieces, nephews and great nieces and nephews. In addition to his parents, he was predeceased by his other siblings: Joseph Memmi Sr., Trieste Brandt, Abel Memmi, Linsey Memmi, Blanche Stinson, Dima Memmi, Villie Memmi, Arthur Memmi and Paul Memmi. There will be a visitation from 6:00 to 8:00 p.m. on Wednesday, April 3, 2019 and from 10:00 a.m. to 11:00 a.m. on Thursday, April 4, 2019 at the William F. Sellers Funeral Home. A Funeral Service will be held at 11:00 a.m. on Thursday, April 4, 2019 at the funeral home with Deacon Ramsey officiating. Burial will be in Corpus Christi Cemetery. Military honors by the Charles Nitterhouse Post #1599 Honor Guard. Donations may be made to one of the veterans organizations listed above. Online condolences may be expressed at sellersfuneralhome.com

Anthony Martin Memmi, 86, of Chambersburg passed away on Saturday, March 30, 2019 at home. He was born November 11, 1932 in Three Springs, PA the son of the late Domenico and Grazia (Facchinei) Memmi. He was a member of the Corpus Christi Catholic... View Obituary & Service Information

The family of Anthony Martin Memmi created this Life Tributes page to make it easy to share your memories.

Anthony Martin Memmi, 86, of Chambersburg passed away on Saturday,...

Send flowers to the Memmi family.