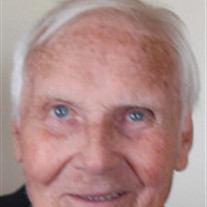 Byrd James Stoudt, 83 of Scotland, Pennsylvania, died Monday evening surrounded by family on March 30, 2015 at Chambersburg Hospital. Byrd, known in his life as BJ Stoudt was born on April 27, 1931 to Charles Stoudt and Hilda Henninger Stoudt in Strausstown, Pennsylvania. BJ grew up in Strausstown and went to elementary school with Dawn Evans Anthony, who would later become his wife and life partner on November 25, 1957. BJ grew to be a talented athlete during High School and at East Stroudsburg College, where he played on the National Championship Soccer team and the varsity Baseball team. BJ was recruited by the St. Louis Cardinals Baseball Organization, and was known as a left-handed slugger. Later, BJ continued his baseball career with a successful stint in the County Leagues earning many batting titles. BJ played on the professional baseball circuit for 3 years before returning to East Stroudsburg to finish his degree in Physical Education and marry his wife, Dawn. BJ and Dawn have two children, eldest Elizabeth S. Rahauser, married to Charles F. Rahauser, living in Chambersburg and James Anthony Stoudt, married to Helen “Dee” Stoudt, living in Camp Hill, PA. BJ has two beloved grandchildren, Elizabeth E. Rahauser, of Wheeling, WV and Charles A. Rahauser, of Charlotte, NC; known as “Beth” and “Chas”, who were the light of BJ’s life. BJ spent many years as a teacher and Department Head at Chambersburg Area School District and during those years, BJ also earned a Master’s Degree at Temple University. Upon leaving his educational career, BJ dedicated himself to his passion for antiques where he was known for his expertise in the genre of early primitive Americana. BJ’s favorite pass times included fishing trips to Montana and Canada and studying Native American History, which led him to co-develop a screen play based on a post Civil War Captain’s diary from the surrounding area. Services for BJ will be held in Chambersburg at St. John’s United Church of Christ 1811 Lincoln Way East on Friday, April 3rd, 2015. The family will welcome visitors at 8:30AM with a Memorial Service at 9:30AM. Immediately following the service, family and friends will travel to Zion Blue Mountain United Church of Christ, 6573 Old Route 22 Strausstown, PA for a visitation at 1:30PM followed by a Memorial Service at 2:00PM. The interment of the body will immediately follow at graveside. To honor BJ’s great love of animals in need, donations will gladly be accepted at Greener Pastures No Kill Animal Rescue P O Box 278 Marion PA 17235. Send condolences to William F. Sellers Funeral Home at www.sellersfuneralhome.com To send flowers to the family or plant a tree in memory of Byrd J "BJ" Stoudt, please visit our Heartfelt Sympathies Store.

The family of Byrd J "BJ" Stoudt created this Life Tributes page to make it easy to share your memories.