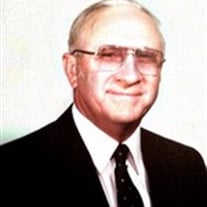 C. Alvin Patterson, 88, of Chambersburg passed away at the Chambersburg Hospital on Sunday, April 12, 2014. He was born October 17, 1926 in Hamilton Twp., the son the late J. Fred and Alda (Lohr) Patterson. He was a life-long member of St. Thomas Lutheran Church where he sang in the choir and served the church in numerous capacities for many years. He was on the Hamilton Township planning committee for many years. In his early life he was a dairy farmer, a school bus driver and played in the St. Thomas Band. For over 30 years he worked at Stouffer Bros. in the parts dept. Alvin was a founding member of CV Antique Engine and Machinery Assoc. He loved antique tractors and displaying them, but mostly, he enjoyed spending time with family. He is survived by his loving wife of 66 years, Ruby Grace Snider Patterson; three children: Joanne Secrest, (William), Larry Patterson (Sue), Brenda Hill, (Jim); six grandchildren: Amy Wimer (James J. Jr), Rachel Mattson (Huston IV), Jesse Hill, Laura Hill, Jacob Hill, Taryn Wildeson, great grandson, Cody Martin; five step grandchildren and many step great grandchildren. He was preceded in death by a brother, Kenneth Patterson, and a sister, Evelyn Rotz. The funeral service will be held 11:00 a.m. on Thursday, April 16, 2015 at the St. Thomas Lutheran Church with the Rev. Warren Heintzelman officiating. There will be a visitation from 6-8 p.m. on Wednesday, April 15, 2015 at the W.F. Sellers Funeral Home and one hour prior to the service at the church on Thursday. Burial will be in St. Thomas Cemetery. In lieu of flowers, donations may be made to the St. Thomas Lutheran Church. Online condolences may be expressed at www.sellersfuneralhome.com To send flowers to the family or plant a tree in memory of C. Alvin Patterson, please visit our Heartfelt Sympathies Store.

C. Alvin Patterson, 88, of Chambersburg passed away at the Chambersburg Hospital on Sunday, April 12, 2014. He was born October 17, 1926 in Hamilton Twp., the son the late J. Fred and Alda (Lohr) Patterson. He was a life-long member of St. Thomas... View Obituary & Service Information

The family of C. Alvin Patterson created this Life Tributes page to make it easy to share your memories.

Send flowers to the Patterson family.