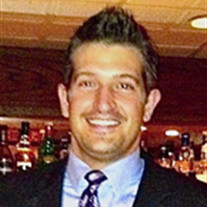 Chesley Bard Patterson's life was tragically taken at 12:06 a.m. on Monday, January 24, 2022. He was just 44 years old. Chesley was born March 25, 1977 and is survived by his mother, Donna K. Harrison, and father, Carl A. Patterson, both of Chambersburg, PA. He graduated from Chambersburg Area Senior High School in 1995. He is also survived by his sister, Melissa L. Punt (Ross), Jennifer Plum (David), his nieces, Cassidy Patterson, Madison Patterson, Cloey Punt, Lindsay Weller and nephew, Benjamin Weller (Camry). Chesco, as he was fondly known by his La Scala Ristorante Italiano family, lived and worked in Baltimore, MD, for the past 24 years. He was employed by La Scala for 17 years and General Manager for the last 14 years. Nino Germano, La Scala owner, described Chesley as a staple in Little Italy and "was like the brother I never had". He was family and loved by all who knew him. In addition to his immediate family, Chesley is survived by his aunt, Connie Estep (Rick), and uncles Ed Bard and Dennis Bard (Georgie), as well as many cousins, great nieces and a nephew. Besides his parents, Chesley was preceded in death by his step-father, George M. Harrison and his grandparents, E. Bruce and Mildred Lorraine Bard and Lynn T. and Vada A. Patterson. A Celebration of Life will be held at a later date. Those wishing may offer the family condolences at www.sellersfuneralhome.com.

The family of Chesley B. Patterson created this Life Tributes page to make it easy to share your memories.

Send flowers to the Patterson family.