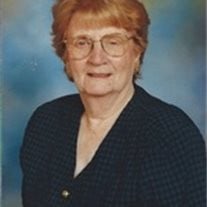 Dorothy Frances Baker, 89, of Chambersburg, passed away on Monday, April 21, 2014 surrounded by her loving family. She was born on September 2, 1924 in Ada, Oklahoma. The daughter of the late George and Freda Hess Crumley, Dorothy graduated from the University of Oklahoma with a Bachelor of Science in Education in 1944. Following in the footsteps of both her mother and grandmother, Dorothy taught history and English at the local high school and also coached the girls state champion basketball team. During World War II, she contributed to the war effort by teaching young soldiers to swim. An avid sports fan, Dorothy loved college football and eagerly cheered on her college alma mater with her famous battle cry. Dorothy’s incredible knowledge of the game challenged even the most ardent male armchair quarterbacks and left most of them dazed and confused. Raised in an era where women stayed at home raising their children, Dorothy encouraged her daughters and her son to pursue their dreams no matter what they may be. She is survived by her children Sarah Becker of Lakewood, WA., Byron Ritter (wife Alisha) of Ellensburg, WA., Madge Sauter (husband Russell) of Chambersburg, PA., and Dorothy DeLucchi (husband Stephen) of Severn, MD. Grandchildren: Joey, Adam, and Kyle Becker, Elizabeth Sobolewski, Kimi Richardson, Kathleen Schwartz, Tony and Kevin Ritter, Logan and Hailey Armstrong, Heather Cantler, Ashley Rauth, Kristen Tine, Dominic and Caitria DeLucchi and numerous great grandchildren, nephews and nieces. Her loving husband and soul mate of 43 years Kenneth Baker preceded her in death. The funeral service will be held at 4 pm on Friday, April 25, 2014 at the Open Door Church in Chambersburg, PA with Pastor Mike Sanders officiating. Mourners are invited to stay for fellowship following the service. Online condolences may be expressed at www.sellershome.com. To send flowers to the family or plant a tree in memory of Dorothy F. Baker, please visit our Heartfelt Sympathies Store.

Dorothy Frances Baker, 89, of Chambersburg, passed away on Monday, April 21, 2014 surrounded by her loving family. She was born on September 2, 1924 in Ada, Oklahoma. The daughter of the late George and Freda Hess Crumley, Dorothy graduated... View Obituary & Service Information

The family of Dorothy F. Baker created this Life Tributes page to make it easy to share your memories.

Dorothy Frances Baker, 89, of Chambersburg, passed away on Monday,...

Send flowers to the Baker family.