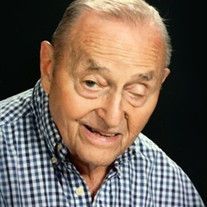 Fayetteville - Edgar R Mouer, age 91, devoted husband and father, passed away Wednesday, June 19, 2019. Born December 5, 1927, in Fayetteville Pa, he was the son of the late Samuel A. and Mary Catherine (Snider) Mouer. On September 9, 1960, he married his wife of 58 years the late MaryAnn (Joseph) Mouer who preceded him in death on June 9, 2019, from injuries sustained from an automobile accident. Edgar served in the United States Army post WW II in the Philippines. He worked as a department manager for Letterkenny Army Depot in Chambersburg until his retirement in 1993. Born and raised on the family farm in Fayetteville, he was an avid bird watcher, hunter, and tree aficionado enjoying the mountains of his native home every day. He was a member of the Knights of Columbus, American Legion, the VFW, and the Audubon Society. Edgar and MaryAnn enjoyed dancing and traveling throughout the United States. He is survived by a daughter, Lisa (Douglas Schauss), and sons, David (Christine), Paul (Maureen), Daniel (Jenni) and 9 grandchildren. A Mass of Christian Burial for Edgar and MaryAnn Mouer will be held on Saturday, June 29, 2019, at Corpus Christi Church, 320 Philadelphia Ave., Chambersburg, PA 17201. Visitation at Noon followed by Mass at 1:00 pm. In lieu of flowers, a gift made be made in his memory to the Audubon Society, PO Box 20, Fayetteville, PA 17222.

The family of Edgar Mouer created this Life Tributes page to make it easy to share your memories.

Send flowers to the Mouer family.