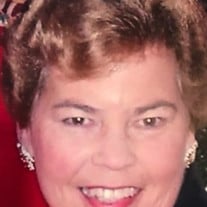 Ellen Kramer (Gilbert) Palmer of Chambersburg died on January 18, 2019 at the Chambersburg Hospital. She was born November 30, 1943 in Chambersburg, the second daughter of Steward E. and Eleanor Romberger Kramer. She was preceded in death by her parents and sister, Ronaele A. Kramer Rotz, age 40, in 1983. Ellen was a 1961 graduate of the Chambersburg Area Senior High School and a 1989 graduate of Penn State Mont Alto with an Associate Degree in Letters, Arts and Sciences. She was a member of the Presbyterian Church of Falling Spring where she had served as an Elder, a Deacon, and a Trustee; Sunday School and Bible School Teacher. She is survived by her husband, Sidney of Chambersburg, one son, Collin S. Gilbert (wife Angela), of Colorado Springs, Colorado, four stepchildren: Linden P. Madara (husband Steven) of Columbus, Ohio; Sidney, Jr. of Philadelphia; Page P. Nitterhouse (husband Craig) of Chambersburg; Grant (wife Heather) of Philadelphia; three brothers: Wilmer (Bud) Kramer (wife Sarah) of Pittsburgh; Robert Kramer (wife Deborah) of Middletown, PA; John Kramer (wife Robin) of New Cumberland, PA. She is also survived by 13 grandchildren and six great-grandchildren who were the light of her life. Her professional life included 10 1/2 years at the former Valley Bank and Trust Company (now M&T) in Chambersburg. She retired as Vice President of Marketing from the former Letterkenny Federal Credit Union (now Patriot) in Chambersburg. She was a member of the American Business Women’s Association for 15 years serving as President, Vice President and leading many of its committees. She volunteered for the Easter Seal Society, Chamber of Commerce Image Committee, United Way, Wilson College in fund raising, served as a board member of Chambersburg Area Council for the Arts and served as its President along with many of its committees; served on the board of the Cumberland Valley School of Music; was a member of the Chambersburg Afternoon Club, served as a secretary for the Angel Hill Animal Sanctuary; and in 1990 begin a 23 year wish-granting relationship with the Make-A-Wish Foundation including as a board member for six years. She also served on the Penn State Mont Alto Advisory Board beginning in 2006 and as it’s Executive Committee in 2007 and serve as Advisory Board Chair for three years, and was named as an Emeritus Member in 2015. In 2002 she joined the Penn National Nursing School Dinner Committee for the Penn State Mont Alto Nursing School Scholarship Program on which she served for 12 years. She served as Volunteer Chair of the Penn State Mont Alto Development Committee. There will be no viewing. A Graveside Service will be held at the convenience of the family at Norland Cemetery in Chambersburg. There will be a Memorial Service held Saturday, January 26, 2019 at 3:30 p.m. in the Sanctuary of the Presbyterian Church of Falling Spring. In lieu of flowers, memorial contributions may be made to: the Make-A-Wish Foundation in Franklin County, C/O Ann Waltman, Reg. Mgr., Make-A-Wish Foundation South Central PA Regional Office, 2951 Whiteford Rd., Suite 304, York, PA 17402; Penn State Mont Alto Scholarship for Veterans, One Campus Dr., Mont Alto PA 17237 or Presbyterian Church of Falling Spring/Children’s Programs, 221 North Main St., Chambersburg, PA one 17201. Funeral arrangements are under the direction of Sellers Funeral Home in Chambersburg.

Ellen Kramer (Gilbert) Palmer of Chambersburg died on January 18, 2019 at the Chambersburg Hospital. She was born November 30, 1943 in Chambersburg, the second daughter of Steward E. and Eleanor Romberger Kramer. She was preceded in death by... View Obituary & Service Information

The family of Ellen L. Palmer created this Life Tributes page to make it easy to share your memories.

Send flowers to the Palmer family.