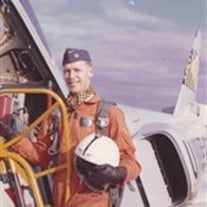 Col. Ernest Cook Dunning, Jr. retired, 88, of Chambersburg, passed away on Friday, August 9, 2013 at home. He was born on Thursday, January 8, 1925 in Chambersburg, PA the son of the late Ernest Cook and Arleta (Dymond) Dunning, Sr. He was a life member of Presbyterian Church of Falling Spring and a 1943 graduate of C.H.S. Ernie served his country for over 31 years as a fighter pilot in the USAF. He served in WWII in the Army Air Corps and then went to West Point, graduating in 1950. During the Korean Conflict, he was shot down and spent 26 months as a P.O.W.; after returning home, he continued to fly for the Air Force and served two rotations in Vietnam. Among other organizations, he was a member of the Daedalus and a life member of the Charles Nitterhouse Post #1599 V.F.W. Ernie was proud of being a Chambersburg Native and doubly so when he retired and the family moved to Chambersburg. Flying was not only his job, but his passion. He loved to take his family camping, skiing, traveling and fishing. The hunting….well, he was on his own! Ernie was an avid wood turner, enjoyed fixing things, spending time with family and friends and reading just about everything. His family will miss his quiet ways, loyalty, courage, sense of justice and humor. He is survived by his wife - Maurene B. Dunning, two daughters: Kristin (Mrs. William) Sellers, Kimberly Lynn Dunning; two grandsons: William "Sharkey" Sellers and Elias “Eli” Dunning; two sisters: Jeanne (Mrs. Jack) Tyrer and Jane ( Mrs. Robert) Carpenter and several nieces and nephews. The Memorial Service will be held at 1:30p.m. on Sunday, September 1, 2013 at the William F. Sellers Funeral Home with the Rev. Mark A. Medina and Rev. Dr. William H. Harter officiating. Burial will be in Falling Spring Graveyard. Military Honors will be provided by the Charles Nitterhouse Post # 1599 V.F.W. Memorial Donations may be made to: Charles Nitterhouse Post # 1599 V.F.W. Honor Guard, 747 S 4th St, Chambersburg, PA 17201. To send flowers to the family or plant a tree in memory of Ernest Cook Dunning Jr., please visit our Heartfelt Sympathies Store.

Col. Ernest Cook Dunning, Jr. retired, 88, of Chambersburg, passed away on Friday, August 9, 2013 at home. He was born on Thursday, January 8, 1925 in Chambersburg, PA the son of the late Ernest Cook and Arleta (Dymond) Dunning, Sr. He was... View Obituary & Service Information

The family of Ernest Cook Dunning Jr. created this Life Tributes page to make it easy to share your memories.

Send flowers to the Dunning family.