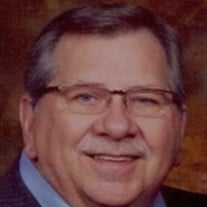 Eugene E. “Ike” Eiker, 68, of Lewis Center, OH, died Fri., Sat. 28, 2015 at home. He was born April 9, 1946 in Gettysburg, PA to the late Elmer E. and Dorothy Redding Eiker. Ike was in the U.S. Army and served in Vietnam1965-66. Ike is survived by his wife of 46 years, Connie Bard Eiker of Lewis Center, two sons, Eric (and wife Linda) of Chambersburg, and Alan (and wife Jennifer) of Niles, MI; five grandsons, Tucker, Skyler, Brody, and Kayden Eiker and Jesse Wenrick. He is survived by two brothers Ronald (Linda) and Jeffrey (Jodi), four sisters Diana (Alvin) Meyers, Gloria (Ray) Martin, Barbara (Neal) Myers and Jenice Ditzler; two brothers-in-law Edgar Bard and Dennis (Georgi) Bard, one sister-in-law Donna (George) Harrison; 16 nephews and nieces and 11 great-nephews and -nieces. He also leaves in the care of his wife, his beloved dog, Shayla, who was never far from his side. Ike retired after 39 years in the hot metal Forging Industry. Throughout his career, he was employed by the Chambersburg Engineering Company, Ashtabula Forge, Ashtabula, OH and Michiana Forge, South Bend/Elkhart, IN. He was a member of the Lewis Center United Methodist Church, Veterans of Foreign Wars Post 1599, BPOE Elks No 600 of Chambersburg, PA and the Detrich-Brechbill American Legion Post 612, St. Thomas, Pa. Ike volunteered for People In Need, Common Ground and Habitat for Humanity. A viewing will be held from 10 a.m. to 12 Noon followed by a Celebration of Life at 12:00 Noon on Sat. March 7, 2015 at the Chambersburg Church of the Brethren, 260 S. 4th Street, Chambersburg, PA 17201. Burial will be private and at the convenience of the family. Memorial contributions may be made to the Chambersburg Church of the Brethren, Lewis Center United Methodist Church, 1081 Lewis Center Road, Lewis Center, OH 43035, or People In Need, 138 Johnson Drive, Delaware, OH 43015. Online condolences may be expressed at www.sellersfuneralhome.com To send flowers to the family or plant a tree in memory of Eugene Ike Eiker, please visit our Heartfelt Sympathies Store.

The family of Eugene Ike Eiker created this Life Tributes page to make it easy to share your memories.

Send flowers to the Eiker family.