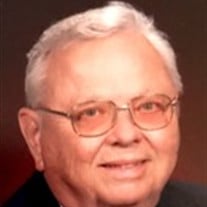 G. (George) Alan Sternbergh, 89, passed away on Tuesday, May 16, 2017. He was born on January 7, 1928 the son of the late Henry and Lina (Voltz) Sternbergh of Westward, NJ. He was a 1946 graduate of Westwood H.S. where he was active in both sports and music. After graduating, Mr. Sternbergh attended the Juilliard School of Music and later distinguished himself with his own big band. He was a 1951 honors graduate of Westminster College, later receiving his masters in education and counseling from Penn State University in 1954. For many years, he was a member of the town of New Wilmington, where he mentored and counseled many young people. During his undergraduate years, Mr. Sternbergh was a baseball player for the legendary coach Charles "Buzz" Ridl. Mr.Sternbergh's first job was Director of Sales and Training for General Fireproofing in Youngstown, Ohio, for 15 years. In 1969, Mr.Sternbergh returned to his Alma Mater, Westminster College, where he was one of the first small college Directors of Career Planning and Placement, a job he would hold for 20 years. During his final years at Westminster he worked in the college Development Office retiring in 1993. He also was a lifetime member of the Alpha Sigma Phi Fraternity, for many years serving as the faculty advisor. During his years as a resident of New Wilmington, Mr. Sternbergh was a Deacon and an Elder of the Neshannock Presbyterian Church, a lifelong member of the Kiwannis Club, coached Little League, girls softball and was responsible for creating one of the first church softball teams in the local area. He loved history and helped co-write several books: When the Titans Truly Were, History of Neshannock Presbyterian Church 1903–2003, and the History of New Wilmington Pennsylvania. Mr. Sternbergh was honored with the New Wilmington Rotary Club's Citizen of the Year in 2002 and the Westminster College Board of Trustees with the Outstanding Lifetime Service Award in to 2004. His wife of 62 years, Margaret (Elliott) Sternbergh survives him, along with four children, Karen Gerstner of Houston TX, Cynthia Travers of Phoenix AZ, Gail Durrett of Austin, TX, Elliott Sternbergh of Carlisle and six grandchildren. In lieu of flowers, memorial contributions can be made to The Neshannock Presbyterian Church, 330 W Neshannock Ave, New Wilmington, PA 16142 or the Sternbergh Scholarship Fund of Westminster College, Officeof Development, Old Main Room 106, New Wilmington, PA 16172. A memorial service will be held 11 a.m. on Monday, May 22, 2017 at the William F. Sellers Funeral Home with Rev. Scott Bowerman officiating. Interment will be at the convenience of the family. Online condolences may be expressed at www.sellersfunealhome.com To send flowers to the family or plant a tree in memory of George Alan Sternbergh, please visit our Heartfelt Sympathies Store.

The family of George Alan Sternbergh created this Life Tributes page to make it easy to share your memories.

Send flowers to the Sternbergh family.