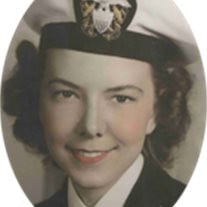 Grace E. Perry, 95, of Harrisonville passed away on February 27, 2017surrounded by family. She was born on January 31, 1922 in Pittsburgh PA, the daughter of the late William J. and Florence (Schneider) Darney. Grace was a member of Corpus Christi Catholic Church and a graduate of Saint Joseph's Hospital school of Nursing. She served in the US Navy Nurse Corps Reserve during WWII and the Korean Conflict. After her Tour of duty, she was employed by U.S. Steel Corp. in Pittsburgh. In 1957 she married James E. Perry. Surviving are: her son, James E. Perry Jr. of Chambersburg; two daughters: Kathleen A. (husband Austin Fred, lll) Gunnell, of Harrisonville, Mary L. (husband Eric) Englehart of Powell, Ohio; a sister, Elizabeth (husband John C.) Sutton of Pittsburgh, PA; seven grandchildren: and five great –grandchildren and a number of nieces and nephews. In addition to her parents, she was preceded in death by her husband, James E. Perry, Sr., two brothers: William J. and Edward J Darney, two sisters: Mary C. Darney and Sister Mary William (O.S.F), a grandson Ethan S. Gunnell, and son-in-law, Austin F. Gunnell, lll. A Mass of the Christian Burial will be held at 12:30 PM on Thurs., March 2, 2017 in Corpus Christi Catholic Church with Rev. Paul Theisz officiating. There will be a visitation from 10:00 AM- 12 Noon prior to the service at the William F. Sellers Funeral Home. Burial will be in Corpus Christi Cemetery with military honors conducted by the Charles Nitterhouse Post #1599 V.F.W. Memorial contributions may be made to: Corpus Christi Catholic Church, 320 Philadelphia Ave., Chambersburg PA 17201, or SpiriTrust Lutheran Homecare and Hospice, 2700 Luther Drive, Chambersburg, Pennsylvania 17201 Online condolences may be expressed at www.sellersfuneralhome.com To send flowers to the family or plant a tree in memory of Grace Perry (Darney), please visit our Heartfelt Sympathies Store.

Grace E. Perry, 95, of Harrisonville passed away on February 27, 2017surrounded by family. She was born on January 31, 1922 in Pittsburgh PA, the daughter of the late William J. and Florence (Schneider) Darney. Grace was a member of Corpus... View Obituary & Service Information

The family of Grace Perry (Darney) created this Life Tributes page to make it easy to share your memories.

Grace E. Perry, 95, of Harrisonville passed away on February...

Send flowers to the (Darney) family.