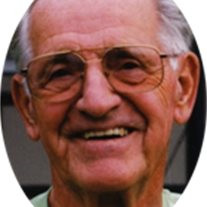 Harry E. Sollenberger, 96, passed away on January 4, 2017 at ManorCare. He was born December 25, 1920 in Culbertson, the son of the late Solomon H. and Mary Ethel (Crouse) Sollenberger. He was a member of the Trinity Episcopal Church. Baseball was his life. He once said "When I was just a youngster, that's all I thought about." He was a left-handed pitcher in the Yankees minor league and the Canadian Galt Terriers (playing as "Lefty Perkins"). He later owned and operated Solly's Billiards in C-burg and Hagerstown for over 25 years. Harry and his wife Pat enjoyed delivering Meals on Wheels for many years. He served in U.S. Army from 1944-1946 and retired as a Staff Sergeant. He served with the 23rd Infantry, 2nd Division in the European Theatre of Operations where, in addition to supervising the blowing up of bridges and trees, he also taught classes regarding same. Harry ended his military career by attending the Physical Training and Athletic Directors School and managing the baseball team on base. An avid bowler and golfer, he and Pat played at many golf courses across the country and enjoyed traveling in his RV. He also enjoyed not only watching sports and politics on TV, but reading those sections in newspapers. Surviving are his wife, Patricia (Herbert); daughters, Cheryl Coldwell, Karen McGrady, Susan Havko (Fran) and Beth Levy (David); grandchildren, Brinn Skroban, Megan Kalb, Kellen Havko, Brian McGrady, Samuel Levy and Scott Levy; great-grandchildren, Kayleigh Timberger and Everett Levy; his nephews, Robin Sollenberger and Randy Sollenberger. He is preceded in death by his parents, his brother, Kenneth Sollenberger, and sisters, Mary Stewart and Dorcas (Crouse) Helmuth. A memorial service to celebrate his life will be held at the Trinity Episcopal Church, 58 S. Second St., Chambersburg on Friday, January 13, 2017 at 11 a.m. The family will receive friends at the Trinity Episcopal Church Parish Hall behind the church on Thursday, January 12, from 6 to 8 p.m. In lieu of flowers, please donate to the Trinity Episcopal Church Community Breakfast Program. To send flowers to the family or plant a tree in memory of Harry Elwood Sollenberger, please visit our Heartfelt Sympathies Store.

Harry E. Sollenberger, 96, passed away on January 4, 2017 at ManorCare. He was born December 25, 1920 in Culbertson, the son of the late Solomon H. and Mary Ethel (Crouse) Sollenberger. He was a member of the Trinity Episcopal Church. Baseball... View Obituary & Service Information

The family of Harry Elwood Sollenberger created this Life Tributes page to make it easy to share your memories.

Send flowers to the Sollenberger family.