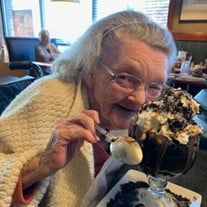 Helen Irene McAlexander, 90, of Gettysburg passed away on Friday, January 24, 2019 in Gettysburg. She was born November 25, 1929 in East riverdale, MD, the daughter of the late Joseph Adelard “Pat” Godbout and Helen Margaret Post. Irene attended Halpine Baptist Church in Rockville, Maryland for many years. She was a loving daughter, wife and mother of four children. Artistic, she loved to draw, crochet and was an experienced seamstress who enjoyed making her children’s clothing. A born-again Christian, Irene opened her heart and home to many who came to look on her as a second mother. She had a wonderful sense of humor and was known to go out of her way to get a laugh out of those around her. She had a deep love for her family, the beach, and anything chocolate. Surviving are her four children: Melanie Margaret Mc Alexander Driscoll and her husband Tad of Carroll Valley, Pennsylvania and their sons Paul Andrew Driscoll and Jeremy Alexander Driscoll, Thomas Mc Alexander of Oxnard, California, Lou Mc Alexander and his wife Teresa of Frederick, Maryland, Elizabeth Irene Mc Alexander of Gettysburg, Pennsylvania; grandchildren: Sarah Alvarez, Amy Pastick, Joshua Koch, and great grandchildren, Isabella, Lilliana, Liam, Christian and Logan. In addition to her parents, she was preceded in death by her husband, Thomas Henry McAlexander; brother Joseph Warren Godbout; paternal Grandparents: William Matthew Adelard Godbout and Herminie Bessette and maternal Grandparents: George Warren “Papa” Post and Henrietta “Gaga” Weber. Irene will be greatly missed. A private celebration of life will be held at a future date. Online condolences may be expressed at www.sellersfuneralhome .com

The family of Helen Irene McAlexander (Godbout) created this Life Tributes page to make it easy to share your memories.

Helen Irene McAlexander, 90, of Gettysburg passed away on Friday,...