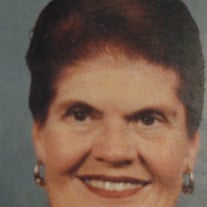 Helen Louise Walterick Meyers Scarlata Helen left this world peacefully, May 3, 2022. Helen was born September 18, 1935 and raised in Chambersburg, Pennsylvania. She grew up on South Street, the daughter of Osro D. and Esther Rodenhaver Walterick. Graduating near the top of her class from Chambersburg High School in 1953, there was no money for her to go to college. She joined her father in creating and expanding his used furniture and appliances store in a house and a few garages on South Street known as Walterick's Furniture. They focused on refurbishing appliances and buying used furniture at auctions and reselling it. Overriding her father, she agreed to buy a couple sets of new walnut end tables from George McCulloh, a salesman with Bagby Furniture wholesalers of Baltimore. They sold out in a week, so she ordered a few more from Mr. McCulloh. By the late '70s George McCulloh rose to become the Vice President of Bagby Furniture and Helen became the largest retail client of Bagby Furniture in South Central Pennsylvania, earning her and her husband numerous European and Caribbean adventures. Her slogan, "Low Overhead, Savings For You" was known to many. In 1974 Helen moved Walterick's Furniture to a new location in St. Thomas, along Route 30. In addition to making sure each and every customer was satisfied, she was a natural marketer. When a couple of whitetail deer jumped through the plate glass window of her new store after Thanksgiving, she quickly wrote an ad for radio in which the announcer proclaimed, "The deals are so good at Walterick's , even Santa's reindeer are shopping here!" Her family members fondly remember chipping in at the annual 3 day store anniversary celebrations in April in which everyone who came through the door was able to eat a ham sandwich, chips and drink punch as many times as they liked, no questions asked. In 1991 she retired from the furniture business and in a short time obtained her realtor's license. She began selling real estate with Prudential Real Estate. Her marketing acumen turned up again, with her trademark slogan, "Buyin' or Sellin', Call Helen!" All her fellow realtors affectionately referred to her as "Sellin' Helen." She retired as a realtor emeritus with Berkshire Hathaway in 2022. In 1965 Helen married J. Robert Meyers, Sr., and supported him in his farming and auctioneer businesses, just as he supported her furniture store operations and her work as a realtor until his death in 1997. Helen served many local charitable institutions. Chambersburg Community Theater, (CCT), could count on her to provide used furniture for their productions in addition to financial support. She served on the board of the Cumberland Valley Chamber Players, which provided quality chamber music to the community for many years. In the early 1980's, she joined a group of committed residents of St. Thomas to raise the funds to build a medical building and bring a family physician to St.Thomas. While she never became a member of Lions Club International, she supported her husband, J. Robert Meyers in his efforts to promote Lionism throughout the area. She was a member of a local Farm Women group and helped in their french fries booth at the Shippensburg Fair. She loved to travel, whether it was to Colonial Williamsburg, Rehoboth Beach, Arizona, Florida, the Midwest, or Europe and Africa. All of these adventures were in the company of family or friends, except the African Safari trip which she tackled all by herself. Helen is predeceased by her father and mother, as well as her brothers, Osro Walterick, Eugene Walterick a sister, Esther Decker, nephew Ron Walterick, niece Pam Decker, and nephew Jim Walterick. She is survived by her spouse Dr. Paul Scarlata, a daughter, Julie Barnhart, (James), son Hon. Shawn Meyers (Nancy), 5 stepchildren through her marriage to J Robert Meyers:, J. Robert Meyers, Jr. ,(Julia), Barb Mathers, (James), F. Jean Koontz, (Dennis), Linda Dice, (Larry), Ed Meyers (Diana). Five step children through her marriage to Dr. Paul Scarlata: Stephanie J. Widder, (Scott), Paul Anthony Jr., (Kris), Christopher, (Jenn), Matthew, ( Luz) and Sarah Nesbitt (Edward) and multiple grandchildren, great grandchildren and great great grandchildren. Celebrant Rev. Dominic M. DiBiccaro will officiate the Mass of Christian Burial at St. Ignatius Loyola Church, 1095 Church Rd, Orrtanna, PA 17353, on Wednesday, May 11, 2022 at 11:00 a.m. followed by the Rite of Committal and Interment at the St. Thomas Cemetery, immediately thereafter. In lieu of flowers, the family requests that contributions be made in her memory to the Wellspan Foundation and designated for Palliative and Hospice Care, 785 5th Ave, Chambersburg, PA 17201 S. St., , 17403 or the Colonial Williamsburg Foundation, 401 W Duke of Gloucester St, Williamsburg, VA 23185.

The family of Helen L Meyers created this Life Tributes page to make it easy to share your memories.

Send flowers to the Meyers family.