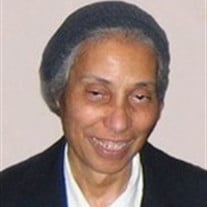 LEWIS, Dr. Hester T. 78, died Monday, July 11, 2016. Dr. Lewis is predeceased by three siblings, Ida Mary Lewis; Lillie Belle Albertson and Anderson Page Lewis. She is survived by her second cousins, Dr. Page Delaney, Sr. & wife Sherry, of Bedford, PA; and Beverly Page Harris of Swickley, PA; her nephew Michael Albertson & wife Ellen of Burlington, VT; loving first and second cousins, and innumerable friends and associates. Born October 19,1937, in Pittsburgh, PA, of the late Maurice F. and May (Anderson) Lewis. Dr. Lewis was raised in the African Methodist Episcopal Church. She began domestic work at the age of 14, University of Pittsburgh at 17 and Meharry Medical College at 20. Dr. Lewis served her residency at D.C. General Hospital and practiced medicine In Washington D.C., New Hampshire, and later in Massachusetts for 28 years. Dr. Lewis was appointed a member of the National Advisory Child Health and Human Development Council and served from 1971-1975, and was a Macy Faculty Fellow at Harvard Medical School from 1971-1974. Besides her private practice she served for several years on the Harvard Medical School Admissions Committee. At Massachusetts Mental Health Center, Dr.Lewis held positions of Clinical Director, Clinical Coordinator, Staff Service Psychiatrist and attending Physician. She worked extensively in various community based programs for at-risk children and families throughout the metro Boston area. Dr. Lewis traveled extensively with dear friends all through her life. She converted to the Roman Catholic Church at the age of fifty and was very devout. She lived with the Sisters of Saint Benedict Center, Still River, MA from 1997–2005, and remained an associate of the Community until her death. Dr. Lewis lived her final years in Nebraska, where she had so enjoyed her college days. In her own words—she "died in love with Our Lord in the Eucharist." Family and friends are respectfully invited to attend the Mass of the Christian Burial on Saturday, July 23, 2016 10:00 a.m. at Corpus Christi Catholic Church. Burial will be in Lebanon Cemetery. Memorial contributions may be made in memory of Dr. Hester T. Lewis to: Sisters of St. Benedict Center, 254 Still River Rd., Still River, MA 01467. To send flowers to the family or plant a tree in memory of Hester Lewis, please visit our Heartfelt Sympathies Store.

The family of Hester Lewis created this Life Tributes page to make it easy to share your memories.

Send flowers to the Lewis family.