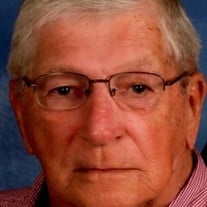 James B. Kirkpatrick, born January 24, 1942, died January 2, 2019, at the Chambersburg Hospital following a year’s illness. He was the son of Roy S. and Pearl Beam Kirkpatrick, deceased. Kirk was a 1959 graduate of the Chambersburg Area Sr. High School, a 1961 graduate of Valley Forge Military Academy, a 1966 graduate of George Williams College and a graduate of Shippensburg University with a Master’s degree in both Counseling and Administration. Before retiring in 1999, he was employed by the CASD for 33 years as a Physical Education/Health teacher, a Guidance Counselor, and a coach of the swimming, volleyball and football programs. Before attending college, he was employed as Acting Director at the Chambersburg YMCA. He was also a summer-painter extraordinaire! He served his community as a Chambersburg Hospital volunteer for the last twenty years, as a Special Olympic volunteer in track/field/and as a skiing buddy. Kirk also served on the Parking/Traffic Boro Committee for several years and as Manager of the Chambersburg Pool, now the Aquatic Center. In the 70’s he was a member of the Fire Department’s Scuba Rescue/Recovery team. He enjoyed hunting, fishing, camping, traveling and kayaking. Survivors include wife, Diane Eberly, whom he was married to for 53 years, and their children Kevin (wife, Andrea) of Farmington, CT, and Craig (wife, Barbara) of Chambersburg. Grandchildren are Emily, Hannah, Liam and Noah. Also surviving is a brother, Robert (wife, Darlene), Orrstown. A Celebration of Life service will be conducted at King Street Church on Saturday, January 12, 2019, at 10 a.m. Memorial contributions may be made to the Chambersburg Area Hospital Auxiliary, Chambersburg Hospital, 112 N. 7th Street or the Tim/Susan Cook Foundation, 435 Stanley Ave. Chambersburg, PA 17201, Attn: CASD Foundations, or a charity of your choosing.

The family of James B Kirkpatrick created this Life Tributes page to make it easy to share your memories.

Send flowers to the Kirkpatrick family.