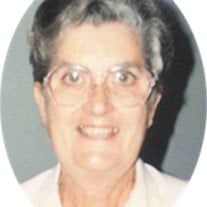 Jane Barton Gipe, 93, died Sunday, June 17, 2018 at Shook Home. She was born in Crystal Spring, PA on February 11, 1925, the daughter of the late H. Bruce and Edith H. (Mellott) Barton. She graduated from Warfordsburg High School in Fulton County and soon after went to work in Chambersburg at Wilson College’s Penn Hall. For a while, she picked strawberries in summer, did ironing for others in her evenings and other jobs to support her children after her first husband, Tony, died. Later, she was employed as a cook at South Hamilton Elementary school until her retirement. Surviving are her granddaughter, Beth Anne Ehlert and two great grandchildren: William H. and Mara J. Ehlert and a sister, Shirley Remsburg. In addition to her parents, she was preceded in death by her first husband, Paul A. Scalia Sr. and second husband, Harold B. Gipe; two children; Sheryl Anne McCurdy and Paul A. Scalia Jr: grandson, Sean McCurdy, two sisters; Hazel Brambley, M. Leone Remsburg and a brother; Bernard Barton. Jane was usually in motion and always found something to keep herself busy. She had a deep pride and love for her family. Her sharp wit and humor were appreciated by her extended family. She kept extensive albums of family pictures, her collection of Zane Grey books (until moving into an apartment). She also collected swans, cardinals, angels and mementos from her children and grandchildren. Although she loved flowers and plants outside, she didn’t want houseplants… saying they wouldn’t live! A memorial service will be held 10:30 a.m. on Friday, June 29, 2018 at the William F. Sellers Funeral Home with the Rev. Vernon Isner officiating. Burial will be in Norland Cemetery. Memorial donations may be made to St. Jude’s Children Hospital, https://www.stjude.org/donate. To send flowers to the family or plant a tree in memory of Jane Barton Gipe, please visit our Heartfelt Sympathies Store.

The family of Jane Barton Gipe created this Life Tributes page to make it easy to share your memories.

Send flowers to the Gipe family.