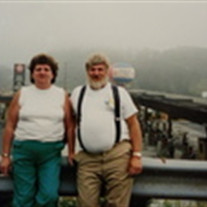 Janet L. Wise, 70, of Chambersburg, passed away on Wed., Mar. 19, 2014. She was born in Hagerstown, Md. on May 21, 1943, the daughter of the late Max and Emma (Chaney) Shantz. She attended CASD and later worked as a presser at Stanley, then at Letterkenny and finally as a nurse's aide at the Falling Spring Nursing Home. She enjoyed crocheting, spending time with her family and with her black lab, Angus. Janet is survived by her husband, Richard Wise and nine children: Stacey Rosenberry (Mark); Randy Ferrell (Rhonda); Steve Farrell; Deborah Wise; Richard Wise (Patty); James Wise (Kathy); Darryl Wise (Kimberla); Karen Middaugh (Frank); Carla Rinker (Earl), three sisters: Sandra Coy, Florence Peck, Maxine Robison; two brothers: Gary and George Shantz; 24 grandchildren; 16 great grandchildren and numerous nieces and nephews. She was preceded in death by her brother, Ronald Shantz and a granddaughter. Funeral services will be held 1pm on Mon., March 24, 2014 at the W. F. Sellers Funeral Home. There will be a visitation on Sun., March 23, 2014 from 4 to 6 p.m. and again on Mon., one hour prior to the service. Burial will be in Parklawns Memorial Gardens. Memorial donations may be to the Homeless Shelter, 223 S. Main St. or to the Maranatha Food Pantry, 195 West Loudon Street, both of Chambersburg, PA 17201. Special thanks to Josh Kriner and EMS and Ambulance Crew. Online condolences may be expressed at www. Sellersfuneralhome.com To send flowers to the family or plant a tree in memory of Janet L. Wise, please visit our Heartfelt Sympathies Store.

The family of Janet L. Wise created this Life Tributes page to make it easy to share your memories.

Send flowers to the Wise family.