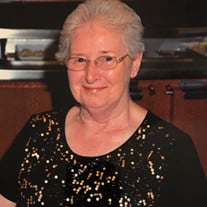 Janet Heckman Yaukey, 85, of Frederick, Maryland, a devoted wife, mother, and grandmother departed unexpectedly from this life into the loving arms of God on December 9, 2021, at Frederick Health Hospital. Born on July 7, 1936, south of Williamson, Pennsylvania, she was the daughter of the late Elwood H. Heckman and Anna F. Heckman. Janet was a 1954 graduate of Lemasters High School. Following her graduation, she married Gerald A. Yaukey in November 1957, eventually settling in Greencastle, Pennsylvania and later moving to Frederick, Maryland in 1968. Janet found enjoyment in being both a mother and a grandmother as her two sons participated in baseball and her two granddaughters excel in soccer as well as track and field. She enjoyed traveling with her husband throughout the United States to visit national parks and botanical gardens. Prior to completing travel to all 50 states, Janet retired from the Frederick County Public School system. In addition to her husband, she is survived by her children Kirk Andrew Yaukey, his wife DeLee, and Kevin Yaukey and his wife Sondra. Janet is also survived by her two granddaughters, Addison Yaukey and Kara Yaukey. Surviving siblings are Eleanor Williams, Roy Heckman, and Paul Heckman. In addition to her parents, she was preceded in death by her brothers Garnet Heckman and Ray Heckman. The family will receive friends on Friday, December 17, 2021, at 1 p.m. at Sellers Funeral Home, Chambersburg, Pennsylvania for visitation followed by a 2 p.m. service and graveside burial immediately afterwards. Interment will be at Lincoln Cemetery in Chambersburg, Pennsylvania. In lieu of flowers, memorial contributions may be made to the American Heart Association at https://www.heart.org. Arrangements are being handled by Sellers Funeral Home, Chambersburg, Pennsylvania. Online condolences may be expressed at www.sellersfuneralhome.com.

Janet Heckman Yaukey, 85, of Frederick, Maryland, a devoted wife, mother, and grandmother departed unexpectedly from this life into the loving arms of God on December 9, 2021, at Frederick Health Hospital. Born on July 7, 1936, south of Williamson,... View Obituary & Service Information

The family of Janet H Yaukey created this Life Tributes page to make it easy to share your memories.

Send flowers to the Yaukey family.