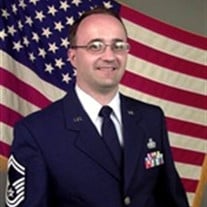 Jerry B. Grove, 56 of Chambersburg passed away on December 29, 2017 at home. Born June 12, 1961 in Chambersburg, he was the son of the late Richard W. and Betty Louise (Bryan) Grove. He attended Faith Church of God, Harbor Light. He was a 1979 graduate of Scotland School for Veterans Children (SSVC) where he was a three sport athlete. Jerry went on to serve his country as a Sr. MSgt. in the USAF, retiring in June of 2006. He served his country during the Grenada, Desert Storm and Iraqi Freedom Wars. While in the service, he completed his Master’s degree in Business administration. He also did a great deal of traveling all over the world including places like Russia, the Azores and Germany, where he was an attaché to a General. In addition to traveling in his military career, he enjoyed traveling the States as well. His life passions were photography, animals and visiting zoos. One of his goals was to go to all of the National Parks in the US. He was a life member of the AMVETS Post # 224, and a Post Member of both the American Legion Post # 46 and the Charles Nitterhouse Post #1599, V.F.W. and was a member of the Marine Corps League. Jerry was the reigning Chess Champion at the American Legion and was an avid Detroit and Notre Dame Fan as well as being the Treasurer of the SSVC Alumni Organization. He is survived by six siblings: Joy Smith (Terry), Joyce Knoll, Jacquelyn Grove (Steve), Darryl Grove, Ron Grove (Nancy), his twin brother, Terry Grove (Irma); nieces and nephews: Gary Smith (Leah) and children: Modena Smith (Danny) and son Izaiah, Steven Smith, Gary Smith Jr, Terry Smith (Nancy) and son, Devin Smith, Trisha Grove, Kayla Grove and many cousins. In addition to his parents, he was preceded in death by his brother, Donald Grove. The funeral service will be held 11a.m. on Tuesday, January 9, 2018 at Sellers F.H. with Pastor Andy Ficks officiating. Visitation is one hour prior to the service. Burial in Parklawns Memorial Gardens. Honors by the Charles Nitterhouse Post #1599 V.F.W. Honor Guard. In Lieu of flowers the family requests memorial donations may be made to Meals on Wheels, 43 West Washington St., Chambersburg, PA 17201 or any American Heart Association, https://donatenow.heart.org. Online condolences may be expressed at sellersfuneralhome. com To send flowers to the family or plant a tree in memory of Jerry B Grove, please visit our Heartfelt Sympathies Store.

Jerry B. Grove, 56 of Chambersburg passed away on December 29, 2017 at home. Born June 12, 1961 in Chambersburg, he was the son of the late Richard W. and Betty Louise (Bryan) Grove. He attended Faith Church of God, Harbor Light. He was a... View Obituary & Service Information

The family of Jerry B Grove created this Life Tributes page to make it easy to share your memories.

Send flowers to the Grove family.