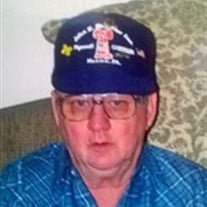 Jesse E. Shew, age 80, formerly of Quincy, passed away Feb. 1, 2015, at Manor Care. He was born Dec. 17, 1934, in Rouzerville, Pa., to the late Grover and Mary (Barnhart) Shew. He was married to the late Mary C. Myers on Jan. 9, 1960. During his life, he served in the Army where he was stationed in Germany, was employed with Max Potter’s Garage in Tomstown, Mentzer/Reed Chrysler Garage in Waynesboro, Fulton Gsell Excavation and Empire Kosher Poultry, Inc in Mifflintown, Pa. before retiring. He also enjoyed being a member of the Board of Quincy Ox Roast Association., the Franklin County Snowmobile Club, and a CB Radio Club of Waynesboro, where his call name was “The New Yorker”. Jesse is survived by five children, Jeff Shew of Waynesboro, Greg Shew of Chambersburg, Cindy (Shew) Rushing of Hagerstown, Bonnie (Shew) Gupta of Elkton and Connie (Shew) Koh of New Market; two surviving siblings, James Shew and Richard Shew; and ten grandchildren and one great-granddaughter. He is preceded in death by his wife of 25 years, Mary C. Myers; eight siblings, Frank Shew, William Shew, Mary Martin (Shew), Roy Shew, John Shew, Grace Myers (Shew), Dorothy Hartman (Shew) and Paul Shew; and his longtime companion Dorothy “Dot” Bryner of Mifflin, Pa. A special thanks to the staff at Michaux Manor of South Mountain for the care provided to Jesse for the last 5 years, especially to his great niece, Doreen Young. Online condolences may be expressed at www.sellersfuneralhome.com To send flowers to the family or plant a tree in memory of Jesse Ernest Shew, please visit our Heartfelt Sympathies Store.

The family of Jesse Ernest Shew created this Life Tributes page to make it easy to share your memories.

Send flowers to the Shew family.