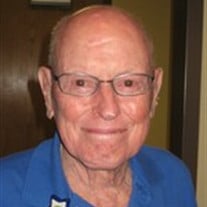 Dr. John D. Ashby passed away while asleep at home in Chambersburg on June 7, 2017, just 43 days before celebrating 100 years of life. He was born in Cedar Rapids, Iowa, and attended Coe College there, graduating in1939. He then went to Temple Medical School in Philadelphia; he joined the Army during World War 11 after earning his medical degree in 1943. He served in Germany as a Medical Company Commander with the 78th Infantry and provided medical care during the Battle of the Bulge. He was in Berlin as part of the early Army occupation when American, French, English, and Russian troops were intermingling after the war. After leaving Germany, he returned to Temple for a residency in orthopedic surgery. While there, he met and married his wife, Dorothy Nanovic Ashby, who died in 1999. He was also preceded in death by his parents, Claire Dinwiddie Ashby and Delbert Ashby; his sister, Jean Ashby; and his son, Thomas Ashby. He is survived by his daughter Claire Fazio and her husband Vincent; his daughter-in-law Tamra Ashby; six grandchildren; and two great grandchildren. On becoming an orthopedic surgeon, Dr. Ashby returned to the US Army for service in the Korean War, postings including Japan and Hawaii, and duty as Commander of the Army Hospital at Fort Hood Texas. He retired as a colonel in 1968. He joined Dr. Robert Richards, Sr., a fellow Temple alumnus, in Chambersburg that year, thus beginning a second career in surgery. During his time on the Chambersburg Hospital’s medical staff, he served as chairman of the surgical service and was president of the medical staff from 1981 to 1983. In that capacity, he was a member of the Hospital’s board of directors. Dr. Ashby swam three times a week in Chambersburg for nearly three decades and was an active Rotarian for almost that long. He was a volunteer messenger at the Chambersburg Hospital on Fridays for over five years. He enjoyed traveling, jazz, reading, and watching the Charlie Rose Show. And he absolutely loved dancing with his wife. He will live on in the hearts and memories of his family, friends, and patients and will long be remembered for his very generous contributions to organizations he valued. A memorial service honoring Dr. Ashby will be held on Tuesday, July 18th at 11 a.m. at Letterkenny Chapel, 2171 Carbaugh Avenue, Chambersburg. To send flowers to the family or plant a tree in memory of John D. Ashby, please visit our Heartfelt Sympathies Store.

Dr. John D. Ashby passed away while asleep at home in Chambersburg on June 7, 2017, just 43 days before celebrating 100 years of life. He was born in Cedar Rapids, Iowa, and attended Coe College there, graduating in1939. He then went to... View Obituary & Service Information

The family of John D. Ashby created this Life Tributes page to make it easy to share your memories.

Dr. John D. Ashby passed away while asleep at home in Chambersburg...

Send flowers to the Ashby family.