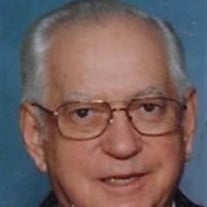 John George Rajtik, 89, of Chambersburg passed away on Saturday, June 16, 2018 at Chambers Point. He was born on March 22, 1929 in Central City, PA the son of the late Michael and Verona( Lucacs) Rajtik. He graduated from Shade High School, continued his education at Johnstown-Pittsburgh before going on to Indiana State Teachers College where he earned his BA and then to Michigan State where he earned his Master’s Degree. He began his career as a driver’s education teacher in the Fulton County schools and later with the Chambersburg Area School District. He ended his career as an advisor in driver education at the Pennsylvania Department of Education. During the Korean War, he proudly served his country in the U.S. Army. John was a member of member of Trinity Lutheran Church, Charles Nitterhouse Post #1599 V.F.W. where he served on the Honor Guard, American Legion Post #46, George Washington Masonic Lodge, Tall Cedars and Scottish Rite Club. He also belonged to American Drivers Ed Safety Educators (ADESE) and P.A.C.E. He enjoyed woodworking and making clocks. Surviving are: his wife Betty (Seaman) Rajtik; three children: Barbara Motichka, Linda Shade (Mike), David Rajtik (Pam); five grandchildren: Jonathan Motichka (Taylor), Michelle Motichka, Davis Rajtik (Sarah), Carter Rajtik ( Brystol), Spencer Rajtik and several great grandchildren. In addition to his parents, he was preceded in death by his seven siblings: Elizabeth, Mary, Michael, Julia, Anne, Helen and Pearl. The funeral service will be held 11a.m. on Wednesday, June 20, 2018 at the William F. Sellers Funeral Home. There will be a visitation from 10:00 to 10:45 a.m. prior to the service followed by Masonic Rites from 10:45 until 11:00 a.m. Burial will be in Norland Cemetery. To send flowers to the family or plant a tree in memory of John George Rajtik, please visit our Heartfelt Sympathies Store.

John George Rajtik, 89, of Chambersburg passed away on Saturday, June 16, 2018 at Chambers Point. He was born on March 22, 1929 in Central City, PA the son of the late Michael and Verona( Lucacs) Rajtik. He graduated from Shade High School,... View Obituary & Service Information

The family of John George Rajtik created this Life Tributes page to make it easy to share your memories.

John George Rajtik, 89, of Chambersburg passed away on Saturday,...

Send flowers to the Rajtik family.