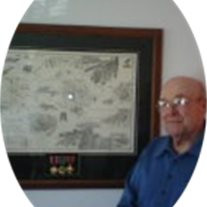 John Joseph Schriver, 91, of Chambersburg entered into eternal life Jan. 3, 2015 at the Chambersburg Hospital. Born in Harrisburg on July 25, 1923, he was the son of Elmer and Helen (Kautz) Schriver. He served in the US Army during WWII; landing in Normandy on D-Day, with the 207th Combat Engineers Battalion. By the time he received his honorable discharge; he had attained the rank of Technician 5th Grade and had earned: the Army Good Conduct Medal, European/African/Middle Eastern Campaign Medal with One Silver Star, and the WWII Victory Medal. John was a brave man and never shied away from a challenge. He fought bravely for his country and was prepared to give his life so we may enjoy the freedom we have today. He married Stella N. (Mock) Veitch in 1960. John worked at Wilson College as the Laundry Supervisor/ Coordinator and at Letterkenny as an Optical Technician Worker. After retiring, he became a substitute instructor at The Franklin County Career Technical College in the carpentry department where he was a mentor to young men and women. He was a member of the American Legion Post 46, an active member at the Presbyterian Church of Falling Spring until his health and physical abilities no longer allowed him to attend. John also volunteered with many community organizations throughout his life in Chambersburg. He is survived by his son, James of Houston, Texas; a granddaughter; two great grandchildren; nieces, nephews; great nieces, nephews; great great nieces, nephews; many loyal, devoted friends and his dog, Schotzie. In addition to his parents, he was preceded in death by his wife Stella; son, Daniel; sister, Evelyn Sherrick; two brothers, William (Bill) and Peter. Special thanks to his home care nurses, Sandra R.N., Farrah C.N.A. and Joanna, caregiver and housekeeper, Becky. A Celebration of Life will be held on Jan. 17, 2015 from 1:00 to 3:30 p.m. at The American Legion Post 46, 755 Philadelphia Ave., Chambersburg with The Rev. Dr. William H. Harter officiating. Memorial contributions may be made in lieu of flowers to the charity of your choice. Online condolences may be expressed at www.sellersfuneralhome.com To send flowers to the family or plant a tree in memory of John Joseph Schriver, please visit our Heartfelt Sympathies Store.

John Joseph Schriver, 91, of Chambersburg entered into eternal life Jan. 3, 2015 at the Chambersburg Hospital. Born in Harrisburg on July 25, 1923, he was the son of Elmer and Helen (Kautz) Schriver. He served in the US Army during WWII; landing... View Obituary & Service Information

The family of John Joseph Schriver created this Life Tributes page to make it easy to share your memories.

Send flowers to the Schriver family.