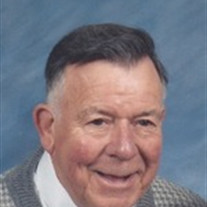 Dr. John "Doc" Jacob Strickler, 89, passed away Friday, January 15, 2016, at Menno Haven Retirement Home. He was born March 1, 1926, the son of the late Dr. Jacob E. and Katherine G. Strickler. John married Marion Howard in 1953. Following the marriage he joined The Presbyterian Church of Falling Spring. He was a man of deep abiding faith. He served as an Elder for many years, including serving as the Clerk of Session, a Deacon, and taught Adult Sunday School for more than a decade, as well as teaching 8th grade Sunday School for years. A 1944 graduate of the Chambersburg High School, John went on to attend Franklin & Marshal College, Lancaster, until he joined the Navy. He proudly served as a corpsman, stationed at Bambridge Naval Hospital in Maryland. John attended the University of Pennsylvania School of Veterinary Medicine, Philadelphia, graduating in 1951. Returning to Chambersburg to practice, John built the Chambersburg Animal Hospital in 1958. He served as the President of the Pennsylvania Veterinary Medical Association from 1963 - 1965. He traveled to Russia in 1965 with "People to People", visiting veterinarians throughout Russia, Germany, Poland, Czechoslovakia, Denmark and Sweden. He saved the life of the FBI tracking dog shot in the Shade Gap Kidnapping case, while caring for all the dogs involved. He trained, tutored, and partnered with numerous veterinarians throughout his career. He retired in 1984. It was his great joy to meet and care for all the large & small animals and their owners over the years. Doc always said "I never had to work a day in my life because I loved what I did". Following retirement, John volunteered tirelessly. He served on the Franklin County Board of Health, volunteered with the local Red Cross, the Chambersburg Hospital, Meals on Wheels, and served as a tutor for the Chambersburg School District. Doc enjoyed hunting and fishing in his younger years, however, his greatest recreational passion was golf. He played into his eighties and loved the game. In his last years, he spoke often of how much he missed the game - his family believes and takes solace in knowing he is already back on the course. In addition to his late parents, and wife, who died on August 10, 2013, he was preceeded in death by two sisters, Dorothy and June. Surviving are his four children, Elizabeth H (Mrs. Dan) Snyder, Jane S (Mrs. Richard) Mackey, John W Strickler (husband of Christine), and Daniel S Strickler (husband of Deborah); seven grandchildren, Andrew O Mackey (husband of Sophie), Daniel S Mackey, Nathaniel J Strickler (husband of Katherine), Elizabeth M Strickler, Hank C Strickler, Luke A Strickler, and Samantha M Strickler; and two great grandchildren, John Robert Strickler and Shepard S Mackey. He is also survived by a niece Kathy Ashway, and a nephew Jimmy Shively and their respective children. His family was his greatest happiness. A memorial service will be held at the Chapel at Menno Haven, Menno Village, Chambersburg on Friday, January 22, 2016 at 1:00pm, with the Rev. Vernon Isner and the Rev. Dr. William H. Harter. There will be a reception to follow. A private family burial will be held at the convenience of the family with the Rev. Andrew Hart officiating. Arrangements are by the William F. Sellers Funeral Home. In lieu of flowers, you may make contributions to the Wounded Warriors Foundation, or the Cumberland Valley Animal Shelter in John's name. The family thanks the caring staff at Menno Haven, Christian Companions, and Tracy with Hospice for their care and devotion to Doc, as well as Mimi. It meant the world to Doc and to all of us. To send flowers to the family or plant a tree in memory of John J Strickler, please visit our Heartfelt Sympathies Store.

The family of John J Strickler created this Life Tributes page to make it easy to share your memories.

Send flowers to the Strickler family.