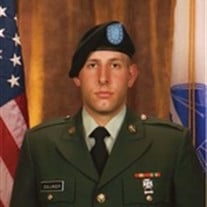 John Eric Zullinger, 30, of Chambersburg entered this world on December 17, 1985 destined to be a Warrior of the World and died October 15, 2016, a Warrior in God's Army. He was born Hershey, PA, the son of David W. and Deborah (Bowers) Zullinger. He was a member of the class of 2007 at CASHS. After graduation, he joined the US Army as a cavalry scout. He was stationed at Fort Drum, NY with the 10th Mt. Division 1-71 CAV and shortly after deployed to Iraq, then Afghanistan. While in Afghanistan he reenlisted and then transferred to Joint Base Lewis-McCord First Squadron 14th Cavalry Regiment Second ID and B "Bronco" Troop. Shortly after arriving at Fort Lewis, he again deployed to Afghanistan. During these three deployments, he left many good friends. But one in particular on his last deployment, Sergeant Robert Billings, whose family he visited in Amarillo, TX on his way home; after leaving the Army on September 23, 2016, having given 9 1/2 years of Army service. John was a member of the Sons of the American Legion, Squad 46 of Chambersburg. He enjoyed country music, Yuengling Lager, fishing, hunting and crabbing. He was truly at home in the country; he was here to be a country boy. He was a role model to his subordinates and his younger brother, Kyle Taylor, who is following in his footsteps to serve his country. His legacy is one of true heroism, selflessness, love of his fellow man, his family, his country, generosity, respect and honor. Children fill a special place in his heart. It can truly be said that John touched someone's life in all parts of the world. In addition to his parents, he leaves behind his sister, Stephanie E. Zullinger and brother, Matthew D. Zullinger; his “other” family including parents: TJ Anderson and Michael Taylor; brothers Timothy Parker (LaKay) and Kyle Taylor; nephews: Alexander Malone, Jason Parker; three nieces, Lily Parker, Mae-Leigha Lewis, Avalyn Lewis; his Band of Brothers: Kyle Myers, Jamel Small and Eric Knepper; his army brothers and sisters; maternal grandmother Rosalie Bowers, aunts, uncles and cousins. He is preceded in death by paternal grandparents Frederick M. and Myrtle C. Zullinger, M. Richard Bowers and niece Katie Belle Parker. A Celebration of Life will be held 1:00 pm on Monday, October 24, 2016 at the First Church of God with the Rev. Lawrence Metzler officiating. There will be a visitation from 3 to 6 PM on Sunday, October 23, 2016 at the William F. Sellers Funeral Home. Monday’s service will be available for live streaming at: www.cfcog.cc / live. In lieu of flowers the family requests memorial donations in John's honor be made to Pets for Vets, http://www.petsforvets.com/donate or wounded Warrior Project, https://www.woundedwarriorproject.org/ To send flowers to the family or plant a tree in memory of John Eric Zullinger, please visit our Heartfelt Sympathies Store.

John Eric Zullinger, 30, of Chambersburg entered this world on December 17, 1985 destined to be a Warrior of the World and died October 15, 2016, a Warrior in God's Army. He was born Hershey, PA, the son of David W. and Deborah (Bowers) Zullinger.... View Obituary & Service Information

The family of John Eric Zullinger created this Life Tributes page to make it easy to share your memories.

John Eric Zullinger, 30, of Chambersburg entered this world on...

Send flowers to the Zullinger family.