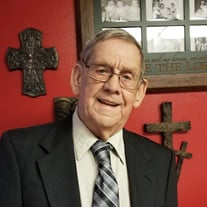 Kermit G. McNew, 85, passed away February 22, 2021 at WellSpan Chambersburg Hospital, Chambersburg, PA. He was born September 17, 1935 in Fayetteville, PA, the son of Lillie and Walter McNew. Kermit was the youngest of 8 children and had the nickname "Tiny" for most of his life and was known as "Speedy" to many of his coworkers because he was always getting his work done quickly and "speeding" on to the next task. Kermit was raised in Fayetteville, PA on Coldspring Road and was very close with his brothers and sisters. After the untimely death of his father, Walter, Kermit began work at the age of 15 to help contribute to his family's income. He found work with Garman Construction and went on to work at many of the large companies in the greater Chambersburg area, including Heinz Company and Grove. He worked as the Maintenance Manager at the Comfort Inn in Greencastle, PA and retired from there in 2000. In 1973, Kermit began to follow Jesus Christ as his Lord and Savior. Kermit's relationship with Jesus became the most important thing in his life, and he was an example of the transformative power of the Gospel. He was very involved with the churches he attended, and he served and volunteered his time generously. Kermit enjoyed hunting, getting some fresh air on the front porch, reading the Bible, watching football (especially the Philadelphia Eagles), and finding a lost treasure at one of the local auctions around Chambersburg. Kermit married Linda McNew on November 20, 1982 and was a loving husband, step-father, and grandfather to her two boys and their families. He had 5 daughters with his previous wife, Darlene, and he always enjoyed visiting with his daughters and their families. Kermit is survived by; Linda McNew (Spouse), Patricia (William, preceded in death) Albert (Daughter), Pamela (Alan) Leedy (Daughter), Gail (Doug) Peters (Daughter), Hazel (Michael) Brown (Daughter), Chad (Megan) Davis (Stepson), Benjamin (Kari) Davis (Stepson), 15 grandchildren, numerous great-grandchildren, and a number of great-great-grandchildren. He is preceded in death by; Walter McNew (Father), Lillie McNew (Mother), Robin (Lynn) Auchey (Daughter). Graveside services will be private for family, and a public Memorial Service will be held on March 20, 2021 at 1:30 pm at King Street Church, 162 E. King Street, Chambersburg, PA 17201. The family will be greeting guests from 1:00 pm. Masks and social distancing will be observed, and a live stream of the service will be available at http://kingstreetchurch.com/funeral. Online condolences may be expressed at https://www.sellersfuneralhome.com/obituaries/Kermit-McNew/

Kermit G. McNew, 85, passed away February 22, 2021 at WellSpan Chambersburg Hospital, Chambersburg, PA. He was born September 17, 1935 in Fayetteville, PA, the son of Lillie and Walter McNew. Kermit was the youngest of 8 children and had the... View Obituary & Service Information

The family of Mr Kermit G. McNew created this Life Tributes page to make it easy to share your memories.

Send flowers to the McNew family.