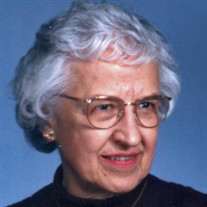 Mrs. Lillian Tubbs Seefeldt, 95, died Saturday, February 12, 2022, at Chambers Pointe Health Care Center of Menno Haven, Chambersburg. She was formerly of Harrisburg and many other locations thanks to frequent moves for her husband’s career, and most recently of Chambersburg where she lived for 44 years. She was the wife of the late Clinton Robert Seefeldt, who preceded her in death on May 30, 1984. Born August 11, 1926, in Glens Falls, New York, she was the daughter of the late John Clinton and Lulu Effie Kenyon Tubbs. She held a Bachelor of Arts degree from Cornell University, where she was a member of Alpha Xi Delta sorority. Mrs. Seefeldt was a member of St. Paul United Methodist Church, Chambersburg, where she served as financial secretary for several years. After working briefly as a research chemist and library assistant, she devoted her life mostly to her family. Organizations to which she contributed as a volunteer include Cub Scouts, Boy Scouts, and Girl Scouts, also the American Cancer Society, Meals on Wheels, and Habitat for Humanity. She served churches of which she was a member as trustee, administrative board member, Sunday school teacher, and bell choir member. She loved music, and for several years taught piano lessons. She was a loving wife, mother, and homemaker. Surviving are her sons, John Seefeldt and wife Barbara of Enola; Daniel Seefeldt and wife Ann of Indianapolis, Indiana; Gary Seefeldt and wife Anne of Linglestown; and Randall Seefeldt and wife Lori of Fishers, Indiana; as well as ten grandchildren and two great-grandchildren. In addition to her husband and parents, Mrs. Seefeldt was preceded in death by her brother John Kenyon Tubbs in 1938. The William F. Sellers Funeral Home, Chambersburg, is assisting the family with arrangements. There will not be visiting at the funeral home. Services will be announced at a later time. In remembrance of Mrs. Seefeldt’s life, the family requests that any charitable donations be made in her name to either St. Paul United Methodist Church, 750 Norland Ave, Chambersburg, PA 17201; Chambersburg; Meals on Wheels, 43 W Washington St, Chambersburg, PA 17201; or the American Cancer Society, 1375 Martin St Ste 206, State College, PA 16803.

Mrs. Lillian Tubbs Seefeldt, 95, died Saturday, February 12, 2022, at Chambers Pointe Health Care Center of Menno Haven, Chambersburg. She was formerly of Harrisburg and many other locations thanks to frequent moves for her husband&#8217;s career,... View Obituary & Service Information

The family of Mrs. Lillian Tubbs Seefeldt created this Life Tributes page to make it easy to share your memories.

Send flowers to the Seefeldt family.