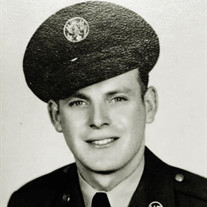 Not sure what to send?

Lloyd Herbert Powell, 91, passed away April 17, 2022 in Charlottesville, VA. Born November 5, 1930, he was the son of John and Lillie Beatty Powell of Warfordsburg, PA. He was raised on the Green Lane Orchard property and attended Warfordsburg schools. Lloyd was a talented musician and briefly played back up for Patsy Cline before enlisting in the U.S. Air Force in 1950. After basic training in San Antonio he was stationed at Burtonwood RAF base in Warrington, Cheshire, England. He returned to Pennsylvania briefly in August of 1952 to marry his high school sweetheart, Estalene Bottenfield. They remained married until her death in December 2021. After serving out his enlistment in the air force, he and Estalene relocated to California for just over a year before returning to PA and settling in Fayetteville. He worked as a mechanic for the Ford Garage in Chambersburg before going to work at Letterkenny. He was quickly promoted out of the motor pool into the computer room and spent the rest of his career with the federal government working with mainframe computers. He eventually transferred to the underground pentagon at Fort Richie, MD, and then to the FAA in Leesburg Virginia in 1970. In 1971 the family moved to Virginia. While at the FAA he was frequently a student at the FAA Academy in Oklahoma City, earning more than 10 certificates of training. After retiring from the FAA he worked for Science Applications International for several years. He was sent to Saudi Arabia, then sent to the FBI in Washington D.C. His second retirement was from SAIC. Mr. Powell was known for his great sense of humor and will be remembered by his grandkids for his "Pappy Jokes". Mr. Powell is survived by his daughters, Gloria Schultz of Lynchburg, VA., and Sharon Moxley of Leesburg, VA., as well as six grandchildren - Kristina Greenberg (Andrew) and Rose Stein (Kristopher) all of Charlottesville, VA, Chad Lickey (Laurie) of Spokane, Washington, Chandler "Kaneila" Schultz (Elizabeth) of Waialua, Hawaii, 1st Lt. Bryce Moxley, USAF and Trevor Moxley of Leesburg, Virginia and great grandchildren Joseph, Charlotte and Lillian Stein, Aaron and Evan Greenberg, Paityn Lickey and Theo and Taya McCaffrey-Schultz. He is also survived by two step great grandsons, Cole Turner of Copenhagen, Denmark and Brennen Kitterman (Kristin) of Spokane, and a step great-great granddaughter, Brinley Kitterman. He was preceded in death by his parents, his wife Estalene, siblings Homer, Alvey, Marvin, Geneva, Gladys and John Kenneth, and 17 nieces and nephews. A graveside service will be held on June 6th at 1 pm at Parklawn Cemetery in Chambersburg, PA. In lieu of flowers, donations can be made to Ohio Fuzzy Pawz Shih Tzu Rescue, P.O. Box 356, Pataskala, OH. 43062 in memory of Lloyd and Estalene Powell.

Lloyd Herbert Powell, 91, passed away April 17, 2022 in Charlottesville, VA. Born November 5, 1930, he was the son of John and Lillie Beatty Powell of Warfordsburg, PA. He was raised on the Green Lane Orchard property and attended Warfordsburg... View Obituary & Service Information

The family of Lloyd Herbert Powell created this Life Tributes page to make it easy to share your memories.