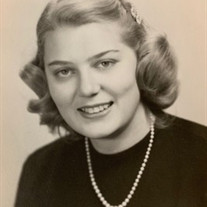 Lois Helen Cook, age 85, of Chambersburg, passed away at Chambers Pointe Nursing Center on October 6, 2019, following a long battle with Parkinson’s disease. She is survived by Kermit, her devoted husband of nearly 64 years, her son Daniel (Heather) and daughter Cheryl, as well as her cherished sister and brother, Carol and Roy. Her new grandson brought her joy late in life. Lois was a proud graduate of Ridgefield Park High School in New Jersey, ranking second in her class. She then undertook nursing training at the Englewood Hospital School of Nursing, receiving her Registered Nurse certificate in January 1956. While in nursing school, she was introduced to Kermit by a fellow student, Nancy Cook, Kermit’s sister. Not quite 60 years later, Nancy and her husband Fred Jacobs joined Lois and Kermit as residents of the Penn Hall/Chambers Pointe community in Chambersburg. Their regular visits sustained this decades-old family bond. Lois practiced nursing for nearly 35 years, in both hospital and industrial settings. Her exceptional kindness and empathy for others made her a natural for this profession. Lois was committed to her profession and her peers, even serving a term as President of the New Jersey Association of Occupational Health Nurses. She also showed her concern for others by sending out untold numbers of greeting cards for birthdays, anniversaries, and any other special occasion. When not at work or busy with her children or family gatherings, Lois always had a craft project going. She especially liked hooking rugs from the “hook it yourself” kits that were popular in the 1960s and 70s. Crafts often took a back seat, however, to her passion for crossword puzzles. Lois took special pride in finishing the “themed” puzzles that appeared on Sundays. No puzzle-maker was clever enough to outwit her. Her natural intellect and curiosity also led her to become one of the Jeopardy! quiz show’s most avid fans. This was appointment viewing for many years! Lois and Kermit took special pleasure, after their children were grown, in vacationing at a campground in southern New Jersey. Following their retirements, they spent entire summers enjoying the simple pleasures found there, especially swimming at the campground’s lake. Lois, a strong and steady swimmer, always preferred lakes to the confines of a pool. She could easily take several laps around the campground’s lake. She did avoid one particular area following an unfortunate encounter with a resident snapping turtle that tried to make a meal of her big toe. Lois and Kermit eventually took this lifestyle on the road, purchasing a camper and taking it to California and back, among other trips. Above all, however, Lois was a woman of faith, worshiping regularly until her health no longer permitted it. As a member of Middle Spring Presbyterian Church in Shippensburg, she participated in their handbell choir, thus fulfilling the commandment to make a joyful noise unto the Lord. She also loved to sing hymns, and she listened attentively to the pastor’s message, always seeking to apply the lessons in her own life. She put her Christian values into practice through volunteer work – especially after arriving at Penn Hall, where she and Kermit spent many Saturday mornings visiting residents of the nursing center. On Thursdays, they worked shifts at the facility’s “country store.” The viewing for Lois will be held on Friday, October 11, 2019 from 12 noon to 2 p.m. at the funeral home. The funeral and burial will follow, with interment in Norland Cemetery. In lieu of flowers, memorial donations may be made to the Menno Haven Benevolent Fund, 2075 Scotland Ave, Chambersburg, PA 17201

Lois Helen Cook, age 85, of Chambersburg, passed away at Chambers Pointe Nursing Center on October 6, 2019, following a long battle with Parkinson&#8217;s disease. She is survived by Kermit, her devoted husband of nearly 64 years, her son Daniel... View Obituary & Service Information

The family of Lois H Cook created this Life Tributes page to make it easy to share your memories.

Lois Helen Cook, age 85, of Chambersburg, passed away at Chambers...

Send flowers to the Cook family.