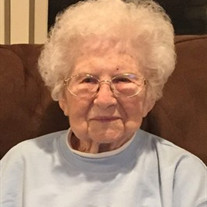 Loraine G. Rotz, age 101, formerly of Fayetteville, passed away of natural causes on Wednesday, April 15, 2020 at her son’s home. She was born November 4, 1918 in Chambersburg, the daughter of the late Melvin and Ethel (Garns) Hartzok, and wife for 71 years of Kenneth E. Rotz. Loraine was a 1936 graduate of CASHS, where she received honors for her athleticism. She developed her precision in sewing by hand while working at the Stanley Company. Loraine loved to drive and preferred to do so, fast. She confessed her participation in races on Route 11, from Chambersburg to Shippensburg. A woman of substance, she later protested for women to be eligible to race on a male dominated track in Fayetteville. Having been successful, she participated in the first Powder Puff Derby, becoming champion for consecutive years. Loraine prided herself as a “safe fast driver”, driving well into her 90’s without a single accident. During WWII, Loraine joined the “Rosies” at Fairchild Aircraft of Hagerstown, Md, as a spot welder, while her husband joined the Navy. With the men at war, the women’s baseball league of Fayetteville was formed, where she was a star pitcher. As a registered Republican, she was appointed Majority Inspector of Elections in Greene Township and participated with her husband, in the Lions Club, American Legion and VFW. While operating the family business, Rotz’s Refuse Collection, Loraine continued her competitive endeavors, receiving trophies in women’s bowling, softball, and square dancing while creating award winning cross-stitch. She was also a Cub Scout Den Mother and member of King Street Church. Over the past decade, Loraine celebrated each of her birthdays in Florida at Walt Disney World. And even then while driving her red scooter at the parks, the crowds would part like the Red Sea as she relived her street-racing youth. Loraine always lived life on her own terms; at her own pace. She is survived by her son Randall E. Rotz and his wife Nancy (Bigler) Rotz of Chambersburg; her daughter-in-law, Nancy Rotz of LaCrescent, MN; four grandchildren: Nathan Rotz and Angela Rotz, both of Chambersburg, Christina (Rotz) Fenton of Onalaska, WI; Jonathan Rotz of Caledonia, IL and seven great grandchildren. In addition to her husband, she was preceded in death by her son, Kenneth L. Rotz (10/18/2011); great-granddaughter, Arabella Rotz; sister, Sylva Hoover; brothers, Lee and Ronald Hartzok. A private grave-side ceremony, at ParkLawn Memorial Gardens, will be held at the convenience of the family.

Loraine G. Rotz, age 101, formerly of Fayetteville, passed away of natural causes on Wednesday, April 15, 2020 at her son&#8217;s home. She was born November 4, 1918 in Chambersburg, the daughter of the late Melvin and Ethel (Garns) Hartzok,... View Obituary & Service Information

The family of Loraine Garns Rotz created this Life Tributes page to make it easy to share your memories.

Send flowers to the Rotz family.