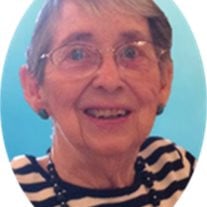 Margaret D. Sponsler, 94, of Chambersburg passed away on Tuesday, March 20, 2018 at Penn Hall. She was born January 1, 1924 in Flint, Michigan, the daughter of the late Daniel Alexander and Florence (Lashbrook) Dewar. A 1940 graduate of Flint Central High School, Margaret worked in the Safeway Stores in Silver Spring Maryland as a cashier for 16 years. She was a longtime member of Central Presbyterian Church where she was an elder, Sunday School Teacher, worked with Mother’s Day Out and the Sewing Group. She was a member of the Chambersburg Afternoon Club; the Girl Scouts, in Michigan and in Maryland, where she was a Girl Scout and then a leader; an Honorary Member of Bethel No. 4 of Flint Order of Job’s Daughters, as well as a volunteer at the Habitat for Humanity Headquarters in Americus Georgia. Margaret enjoyed swimming and was a member of The Swans, a synchronized swimming group at MennoHaven. She enjoyed reading, gardening, traveling, knitting, sewing, and quilting. Surviving are a son, John Simpson (Linda) of Middletown, Maryland; three daughters, Carol Grosbier of Frederick, Maryland, Christine Simpson (Debbie Valdez) of Southport, North Carolina, Martha Myers (Eugene) of Bolivia, North Carolina; three stepchildren: Charles Sponsler of Fairfax, Virginia, Christine Zacco of Jackson, Wyoming, Warren Sponsler of Hancock, New Hampshire; four grandchildren, seven great-grandchildren, one great-great grandchild, four step grandchildren and six step-great grandchildren; also surviving are numerous nieces and nephews. She was preceded in death by her two husbands: Charles R. Simpson, (1985), whom she married in 1943 and her second husband, Charles F Sponsler (2006) whom she married in 1990. Also preceding her in death were: six sisters, three brothers and a son in law, Richard Grosbier. A memorial service will be held at 1p.m. on April 16, 2018 at the Penn Hall – Chambers Point Chapel with Rev. Brenda Doyle and Pastor Scott Bowerman officiating. A private burial will be held at the convenience of the family. Memorial donations may be made to Central Presbyterian Church, 40 Lincoln Way West or Coyle Free Library, 102 N Main St, both of Chambersburg, PA 17201. Online condolences may be expressed at www.sellersfuneralhome.com. To send flowers to the family or plant a tree in memory of Margaret D. Sponsler (Dewar), please visit our Heartfelt Sympathies Store.

Margaret D. Sponsler, 94, of Chambersburg passed away on Tuesday, March 20, 2018 at Penn Hall. She was born January 1, 1924 in Flint, Michigan, the daughter of the late Daniel Alexander and Florence (Lashbrook) Dewar. A 1940 graduate of Flint... View Obituary & Service Information

The family of Margaret D. Sponsler (Dewar) created this Life Tributes page to make it easy to share your memories.

Margaret D. Sponsler, 94, of Chambersburg passed away on Tuesday,...