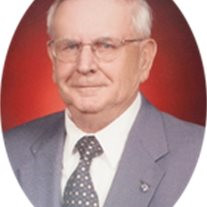 Mark E. Foltz, 88, of Chambersburg, passed away on November 7, 2013 at the Falling Spring Nursing and Rehabilitation Center. He was born April 8th, 1925 in Oakville, PA, the son of the late Ervin and Mary (Reinhardt) Foltz. Mark served in the US Army European Theater in WWII. He was in five campaigns including the Battle of the Bulge. Upon returning from WWII he graduated high school at Newville, PA and began employment at Letterkenny Army Depot, retiring in 1980 as a Transportation Supervisor. He married Joanne (Bair) Foltz on Oct 9, 1954, who survives him. Soon after his retirement from Letterkenny, he became the Director of Buildings and Grounds at the Presbyterian Church of Falling Spring for 20 years, of which he had been a member since 1955 serving as both a deacon and Trustee. Mark was a member of George Washington Lodge #143 FA&M, Scottish Rite Valley of Harrisburg, the South Penn Scottish Rite Club, Waynesboro, PA Shippensburg Scottish Rite Club and George Washington Royal Arch Chapter #176. He was also a member of Elks Clun # 600, Chambersburg, and American Legion Post #42 Newville, PA VFW Post #1599 Chambersburg, PA. Besides his wife, Joanne of 59 years, other survivors include: a son, Matthew of New York City, a daughter Esther (and husband Tim Swinehart, a granddaughter Emma Swinehart and a grandson, Elijah Swinehart), all of Plano, Tx. He is also survived by sisters: Grace Chamberlain of Berkley, Gladys Heffelfinger of Gettysburg; brothers: Wilbur (Dorcas) Foltz of Shippensburg, John (Virginia) Foltz of Carlisle, PA and many nieces and Nephews. Aside from his parents, he was preceded in death by an infant sister, a brother Walter Foltz and a sister, Betty Russell. A Memorial service will be held at 10:30 a.m., on Saturday, November 16, 2013 at the Presbyterian church of Falling Spring with the Rev. Mark Medina and Rev. Dr. William Harter Officiating. Burial will be in Falling Spring Graveyard. Arrangements are by the William F. Sellers Funeral Home. Memorial Donations may be made to the Presbyterian Church of the Falling Spring, 221 North Main Street, Chambersburg, PA 17201 or to the charity of your choice. Online condolences may be expressed at www.sellersfuneralhome.com To send flowers to the family or plant a tree in memory of Mark E. Foltz, please visit our Heartfelt Sympathies Store.

Mark E. Foltz, 88, of Chambersburg, passed away on November 7, 2013 at the Falling Spring Nursing and Rehabilitation Center. He was born April 8th, 1925 in Oakville, PA, the son of the late Ervin and Mary (Reinhardt) Foltz. Mark served in the... View Obituary & Service Information

The family of Mark E. Foltz created this Life Tributes page to make it easy to share your memories.

Send flowers to the Foltz family.