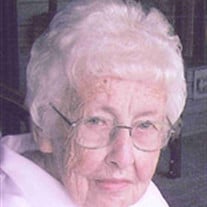 Mrs. Mary (Gillan) Fish , 97,of Penn Hall Nursing Center died August 26, 2015 at Penn Hall, where she has resided for the last 16 years as a resident of the Renaissance, the Manor and for the last 10 months, the Nursing Center. Born January 16, 1918 in St. Thomas, Pennsylvania, she was the daughter of C. Frank Gillan and Mattie (Clark) Gillan. She was a lifelong resident of St. Thomas. Mrs. Fish graduated from St Thomas High School in 1936 and later graduated from Hood College, Frederick MD. in 1940 with a Bachelor of Science degree in Home Economics. She earned a certificate as a hospital dietician from Emergency Hospital in Washington DC. Mary was employed by the Waynesboro Hospital from 1940-41 and by the Chambersburg Hospital from 1942 to 1944. She left that employment to accept a commission as 2nd Lt. in the Women’s Army Medical Corps. She was stationed at the Woodrow Wilson Army Hospital at Staunton, Virginia. While serving there she met her husband (1st Lt.) William D. Fish of Philadelphia, PA. They were married on August 1, 1945 at Central Presbyterian Church, Chambersburg. They enjoyed 54 years of marriage until his death in 1999. Mrs. Fish was a long time member of Central Presbyterian Church and had been active in Women’s Association and the Sewing Circle. She helped with many church projects and dinners and for many years helped prepare and serve the church’s Pork and Sauerkraut Dinner. She was the first cafeteria manager/ dietician for the St Thomas School district in 1965 and later served in that position in the Tuscarora School District. She taught both sewing and cooking classes for the Franklin County Head Start Programs. She was also a member of the Chambersburg Hospital Auxiliary, St. Thomas Community Association, Falling Spring Chapter of AARP and the Toy Mission, Meals on Wheels, and Hood College Alumni Association. She was preceded in death by her parents and a sister Elizabeth Gillan, a brother James Gillan, and a granddaughter, Beth Diehl Heaton. She is survived by a brother, Clark Gillan, St Thomas, a son David and wife Carel of Chambersburg , a daughter Jean (Fish) Diehl and husband Thomas of Chambersburg; and grandsons Alan Fish, Michael Diehl, and Scott Fish; and three great-grandchildren, William, Rachael and Christina. Graveside services will be held for the family at the St. Thomas Cemetery on Mon. August 31 at 11AM, and a memorial service will be held at the Penn Hall Chapel on Tuesday Sept, 1 at 2:30. Memorial contributions may be made to the Central Presbyterian Church, 40 LWW, Chambersburg, PA 17201. Online condolences may be expressed at www.Sellersfuneralhome.com To send flowers to the family or plant a tree in memory of Mary G. Fish, please visit our Heartfelt Sympathies Store.

The family of Mary G. Fish created this Life Tributes page to make it easy to share your memories.

Send flowers to the Fish family.