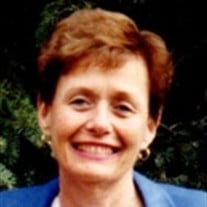 Mary Butts Keil, 85, of Chambersburg, PA, passed away on Sunday, January 28, 2018. She was born May 29, 1932 in Waterloo, Iowa, the daughter of the late J. Harold and Margaret (Black) Butts. She was preceded in death by her husband, William C. Keil (Bill). Mary lived a life devoted to love, excellence and service toward others. She graduated summa cum laude from Vanderbilt University with a bachelor of science in nursing, and took her first job as a nurse at the Ganado Navajo Reservation in Arizona. After two years, she moved to San Francisco where she worked in public health. Soon after, she met Bill at a church ice cream social. She jokingly said that one reason she fell in love with Bill was because she knew he would never leave California. However, two years later his work as an airline executive took them to Seattle, WA, and then to Springfield, VA, Boxford, MA, Atlanta, GA, Farmington Hills, MI, Pittsburgh, PA, and then back to Springfield, VA. After staying home for many years to raise their four girls, Mary returned to work with the Visiting Nurse Association of Allegheny County, Pennsylvania, and was a founding member of the hospice program in Pittsburgh. She retired from the VNA in 1990 when Bill retired from US Airways and they moved to Springfield, Virginia to be closer to their daughters and grandchildren. In Virginia, Mary served as a hospice volunteer, gave flu shots for Inova, and became an active member at Messiah United Methodist Church. She was president of the United Methodist Women, was active in the Stephen Ministry program, was head of the staff parish relations committee, and helped found the parish nurse program at Messiah. Mary always loved to swim, and participated in a water aerobics group. In the summers, Mary and Bill enjoyed socializing with neighbors, church friends, and their local swim club members. Mary and Bill also enjoyed volunteering together for ECHO – Ecumenical Community Helping Others. Mary suffered a stroke in 2004, and was cared for at home before moving with Bill to the Fountains at Washington House in Alexandria, Virginia. In 2016 Mary and Bill moved to Penn Hall, Mennohaven, in Chambersburg, PA to be closer to their daughter, Kathy, and son-in-law, Jay Brown. Mary was devoted to her family, especially Bill. Everywhere they lived, they made wonderful friends, and enjoyed entertaining in their home. They enjoyed traveling together, sailing on the Chesapeake Bay, and spending time at Smith Mountain Lake in Virginia, where the family gathered every summer for over 20 years. She was a devout Christian, and her faith helped her through her disability following her stroke. Toward the end of her life, she continued to be an avid reader, and participated in many activities offered at Penn Hall. Mary never forgot anyone’s name, and was the first to welcome new residents. Bill passed away in November of 2017, and Mary was unable to survive without her best friend and companion. They would have been married for 60 years this coming April. Mary is survived by four daughters: Kathryn (Jay) Brown, Elizabeth Harley, Sharon (Scott) Webb, Susan (Jeffrey) White; nine grandchildren: Jeffrey (Vianne) Brown, Julia Brown, Will Harley, James Harley, Madeline Webb, Harrison Webb, Gabrielle White, Lydia White, Rosemary White; sister Sally Butts Davis; and numerous nieces and nephews. A celebration of her life was held by the family shortly after her passing. www.sellersfuneralhome.com. To send flowers to the family or plant a tree in memory of Mary B. Keil, please visit our Heartfelt Sympathies Store.

Mary Butts Keil, 85, of Chambersburg, PA, passed away on Sunday, January 28, 2018. She was born May 29, 1932 in Waterloo, Iowa, the daughter of the late J. Harold and Margaret (Black) Butts. She was preceded in death by her husband, William... View Obituary & Service Information

The family of Mary B. Keil created this Life Tributes page to make it easy to share your memories.

Mary Butts Keil, 85, of Chambersburg, PA, passed away on Sunday,...

Send flowers to the Keil family.