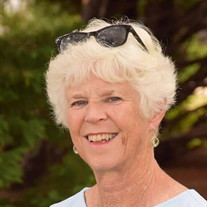 Mary Ann Mason, 76, of Chambersburg, passed away peacefully on Feb. 18, 2022, at the Penn State Hershey Medical Center. Mary was born on Aug. 23, 1945, in Cleveland. She was the daughter of the late Eldon and Louise (Eppinger) Nuernberger. Mary moved to Chambersburg with her family as an infant and remained a lifelong resident. She graduated from Chambersburg Area Senior High School in 1963. She received her bachelor's degree with honors in sociology in 1967 from the College of William & Mary, where she was a member of the Kappa Kappa Gamma sorority. In 1969, she earned her master's degree in social work from the University of Pittsburgh and began her career as a social worker, primarily in the medical field. Mary was a lifetime member of the Presbyterian Church of Falling Spring. She served as a trustee, Sunday school teacher, member of the bell choir and was a past president of the Women's Association. She was a member and past president of the Chambersburg Afternoon Club. Mary was a devoted member of PEO International for over 40 years and served as president of her chapter on three occasions. Always known as a kindhearted friend to all animals, Mary spent over two decades as secretary on the Cumberland Valley Animal Shelter Board of Directors. Having owned four horses over the past 40 years, she was an accomplished equestrian. She enjoyed both domestic and international travel, tennis and playing bridge with friends. Mary is survived by her husband of 52 years, Richard B. Mason, and two sons, Andrew Mason and his wife Danielle, of Hagerstown, Md., and Pete Mason and his wife Marcie, of Chambersburg, three grandsons, Luke, Jaden and Walker, two brothers, John Nuernberger (Sue), of Daniel Island, S.C., and Jerry Nuernberger (Kate), of Redmond, Wash., a sister, Laura McMinn (Bob), of Huntingdon, Pa., and many nieces and nephews. A memorial service for Mary will be held on March 12, 2022, at 11 a.m. at the Presbyterian Church of Falling Spring, with Rev. Dr. Andrew Hart officiating. In remembrance of Mary's life, the family asks that any charitable gifts be made to the Cumberland Valley Animal Shelter, 5051 Letterkenny Rd. W, Chambersburg, Pa., 17201.

Mary Ann Mason, 76, of Chambersburg, passed away peacefully on Feb. 18, 2022, at the Penn State Hershey Medical Center. Mary was born on Aug. 23, 1945, in Cleveland. She was the daughter of the late Eldon and Louise (Eppinger) Nuernberger. Mary... View Obituary & Service Information

The family of Mrs. Mary A. Mason created this Life Tributes page to make it easy to share your memories.

Mary Ann Mason, 76, of Chambersburg, passed away peacefully on...

Send flowers to the Mason family.