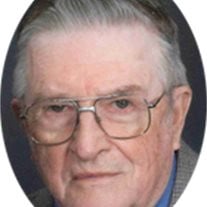 Maurice J. Montgomery, Sr., 88, of Chambersburg died at 10:05 pm on Tuesday, May 27, 2014 at Falling Springs Nursing and Rehabilitation Center. Born November 20, 1925 in Peterborough Ontario, Canada, he was the son of the late Thomas J. and Mary Ellen (Northcott) Montgomery. After coming to the U.S.A., Maurice became a Naturalized Citizen in 1960. Maurice was a Library Media Specialist. He was employed as a librarian at colleges and schools in and around Syracuse, NY, retiring from North High School, Hagerstown, MD in 1989. He Graduated from Oshawa Missionary College, AKA Kingsway College, Oshawa, Ontario in 1948. He earned his BA from Atlantic Union College, South Lancaster, MA, and his MS in Library Science from Syracuse University, Syracuse, NY in 1962. He married Barbara Fullerton Smith Montgomery on June 23, 1963. He was a member of Trinity Lutheran Church, Chambersburg and continued as a faithful Seventh - Day Adventist attendee of the Seventh - Day Adventist Church of Chambersburg. After retiring, he and his wife volunteered at Red Cloud Indian School on the Pine Ridge Indian Reservation, Pine Ridge, South Dakota for one year as Librarian for Our Lady of Lourdes School in Porcupine, SD. He enjoyed reading, photography, gardening, geology, and traveling, especially his trip to The Maritime Provence’s and Labrador via Supply boat, as well as his European travels. In addition to his wife, left behind to celebrate Maurice’s memories are his five children: Maurice J. Montgomery, Jr ( husband of Suzi ), Humble, Texas; Nancy E. Montgomery, Vicenza, Italy; David M. Montgomery, Albuquerque, New Mexico; Donna S. Roland (wife of M. Todd), Chambersburg; Brian T. Montgomery (husband of Carolyn), Hummelstown, Pennsylvania; ten Grandchildren: Lauren and David Montgomery, Candis Allred (wife of Clayton) ; Dustin and Julia Montgomery; Jennifer, Michaela, and Jesse Roland; Benjamin and Kathryn Montgomery; one nephew, two great nephews and their children. Besides his parents, he was preceded in death by two brothers: Victor James Spence Montgomery and Karl Bruce “AKA Thomas Alfred” Montgomery. A Memorial service will be held on Sunday, June 1, 2014 at 4:00 PM at Trinity Evangelical Lutheran Church. There will visitation from 4PM-6PM on Saturday, May 31, 2014 at the William F. Sellers Funeral Home. Private burial will be in Lincoln Cemetery. Memorial Contributions in lieu of flowers may be made to Trinity Evangelical Lutheran Church, 26 West Commerce Street or Chambersburg Seventh- Day Adventist Church, 160 east Liberty Street, both of Chambersburg, PA 17201 or to the charity of your choice. On-line condolences may be expressed at www.sellersfuneralhome.com To send flowers to the family or plant a tree in memory of Maurice John Montgomery, please visit our Heartfelt Sympathies Store.

Maurice J. Montgomery, Sr., 88, of Chambersburg died at 10:05 pm on Tuesday, May 27, 2014 at Falling Springs Nursing and Rehabilitation Center. Born November 20, 1925 in Peterborough Ontario, Canada, he was the son of the late Thomas J. and... View Obituary & Service Information

The family of Maurice John Montgomery created this Life Tributes page to make it easy to share your memories.

Send flowers to the Montgomery family.