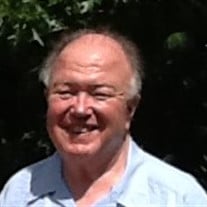 M. Aldean Saufley, 84, of Chambersburg, PA, passed away in hospital Monday, December 14, 2020. He was born in Virginia, September 27, 1936, to the late Charles A.E. and Ruth (Bidwell) Saufley. The family moved to the Chambersburg area in 1951, and Aldean graduated from Chambersburg Area High School (1954), then attended Huntington College, Huntington, Indiana, and studied at Peabody School of Music, Baltimore, MD. Soon after, he assisted his uncle in mission work in Haiti and discovered his niche in radio broadcasting there. This began a ministry of 40 years at Radio 4VEH in Cap Haitian, Haiti, under the direction of One Mission Society; his assignments included news broadcasting and music programming. In Haiti in 1963 he married his wife Ellen (Bressler), a Bible teacher with One Mission Society. After completing their service in Haiti, they retired to the Chambersburg area, and later to the Menno Haven campus. His great love was playing piano and organ music in a creative way, and his opportunities for music ministry expanded greatly during those years. He provided a musical interlude each morning for the Menno Haven community and contributed in many other ways, including as a Bible teacher. He was an active member at the Salem United Brethren Church where he played keyboard for the traditional service. He regularly assisted Cold Springs U.B. Church and God's Missionary Church, Chambersburg, and other ministries with his various musical talents. His extensive ministry resulted in warm and enduring friendships in Haiti and across many states over his lifetime. He was predeceased by his wife, Ellen, and his brother, Duane. He is survived by his siblings: Lois Reese of Newark, DE, Marilyn Wright of Kamloops, BC, Canada, and Muriel Knouse of Shippensburg plus numerous nieces and nephews. There will be a service for family only Monday, December 21; the family requests no flowers. A celebration of his life will be planned for a later time. Memorial gifts may be made to Salem U. B. Church,4349 Letterkenny Rd, or the Menno Haven Benevolent Fund, 2011 Scotland Ave, both of Chambersburg, PA 17201

M. Aldean Saufley, 84, of Chambersburg, PA, passed away in hospital Monday, December 14, 2020. He was born in Virginia, September 27, 1936, to the late Charles A.E. and Ruth (Bidwell) Saufley. The family moved to the Chambersburg area in 1951,... View Obituary & Service Information

The family of Melvin Aldean Saufley created this Life Tributes page to make it easy to share your memories.

M. Aldean Saufley, 84, of Chambersburg, PA, passed away in hospital...

Send flowers to the Saufley family.