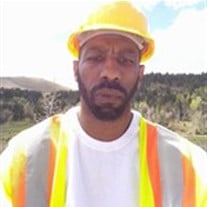 Nathan L. Graham Nathan L. Graham, 43, Sunrise March 19, 1975, in Norwalk, Connecticut and sunset on Saturday, August 18, 2018 in Rapid City, South Dakota. He was the son of Juanita Ward Florian. During his childhood he was raised in Brooklyn, New York were he participated in an abundance of basketball teams and leagues. He liked the underdog and gave them the empowerment and confidence to achieve their goals. He stood up for those who didn’t have the strength and power to stand up for themselves. Nathan loved to interact with children especially those who needed love and guidance. He grew strong attachments to them and wanted to be a good example to give them a better future. After earning numerous certifications, he opened his own construction company Graham Construction LLC. Surviving is his beloved wife Shayla Colbert-Graham whom he married December 1, 2017, four children and six Stepchildren: Natequan Graham, New York. Alexis Wallace, Hawaii. Kalima Devaughn, New York. Ja’Tyus Brown, Chambersburg. Ja’Quineizhia Green, Chambersburg. Ja’Kwonzhia Brown, Chambersburg. Ja’Heir Brown, Chambersburg. Quianna Colbert, California. Kyliel Colbert, South Dakota. four grandchildren; siblings: Anthony Brown (wife Denise Brown), Florida, Herman Brown, New York, Kenneth Graham (wife Tamika Johnson-Graham), Georgia. Brenzina Florian, Chambersburg, (cousin/brother) Rocky Lindsay, Chambersburg and a host of nieces, nephews, and cousins. In addition he was preceded in death by his newborn son. Nathan will be truly missed by all of his family and friends. He will be in our hearts forever. A memorial Service will be held at 5:00 PM on Friday August 31, 2018 at the Open Door Church in Chambersburg, Pennsylvania. The Rev. Mike Sanders will officiate. To send flowers to the family or plant a tree in memory of Nathan Graham, please visit our Heartfelt Sympathies Store.

Nathan L. Graham Nathan L. Graham, 43, Sunrise March 19, 1975, in Norwalk, Connecticut and sunset on Saturday, August 18, 2018 in Rapid City, South Dakota. He was the son of Juanita Ward Florian. During his childhood he was raised in Brooklyn,... View Obituary & Service Information

The family of Nathan Graham created this Life Tributes page to make it easy to share your memories.

Send flowers to the Graham family.