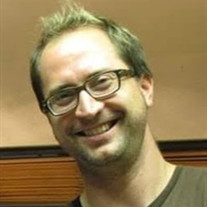 Nathan Miller, 40, Chambersburg, passed away Saturday, January 4, 2020 at home after a three year battle with Primary Sclerosing Cholangitis despite having received a live liver transplant from his uncle, Douglas Walter. Born on March 21, 1979 in Carlisle, he was the son of Richard and Debra Walter Miller. A 1997 graduate of Susquenita High School and Cumberland-Valley Vo-Tech, Nathan won a Bundestag scholarship to study under a German baker for a year. Upon his return to the United States, he earned a degree from the Culinary Institute of America. Food was his passion from an early age. Nathan worked as a chef at Jean George, Aureole, and Danube in New York City before becoming the pastry chef at The Kitchen in Boulder, Colorado. In 2010, he founded Nathan Miller Chocolate in the basement of a friend’s home. In 2013, he moved his business to Chambersburg. A two time winner of The Good Foods Award, he was written up in the New York Times and featured in magazines and blogs such as Real Simple and Vogue. He also was invited to cook at the James Beard House in New York City for two different events. He dreamed big and encouraged others to do the same. Besides his parents, he is survived by his brother Travis and his girlfriend, Mariah Dodson. An informal gathering of family and friends to celebrate his life will be held on Saturday, January 11, at 11:00 AM until 2:00 PM at the Capitol Theatre, 159 S. Main Street, Chambersburg, PA. Dress is casual. A celebration will take place in Colorado on May 23, 2020. All are welcome. Details to follow on his Facebook page, at a later time. In lieu of flowers, donations can be made in Nathan’s name to PSC Partners Seeking A Cure at PSCpartners.org.

The family of Nathan D. Miller created this Life Tributes page to make it easy to share your memories.

Send flowers to the Miller family.