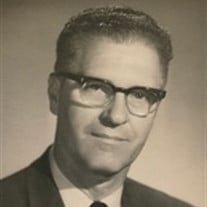 Paul D. Robinson, 98, passed away on Monday, February 12, 2018 at the VA in Martinsburg, WV. He was born July 14, 1919 in Shippensburg, the son of the late Cloyde D. and Ella (Rebuk) Robinson. He was a longtime member of the St. Paul Lutheran Church in Fayetteville where he sang in the choir. Paul worked for 42 years at the Craft Press Building. He was a lifetime member at the L.O.O.M.in Chambersburg where he served as the Local Governor, Burt J. Asper American Legion Post #46, Landis- McCleaf Marine Corps League, Charles Nitterhouse Post #1599 VFW, Disabled American Veterans, a member of the Elks BPOE and the National Republican Committee Presidential Advisory Board. He joined the Marine Corps, serving combat duty in the Pacific Theater, including Okinawa, during WWII (1942-1946) for two years and as a Drill Instructor for both men and women, and completed his education by attaining his GED. Paul earned the Purple Heart, being twice hurt in battle, other awards included the Bronze Star, the China Service Medal, Good Conduct Pin, Pacific Theater Battlestar Ribbon and the Marine Corps League Decoration, Distinguished Citizen Medal. He loved his cats and bowling but mostly he was a people person, caring and helping all who needed his help. He will be remembered as a great father, grandfather and leader. "God broke the mold, after him". He is survived by his wife, Joretta; daughter, Barbara Barnhart; five grandsons, John Jr., Stephen, Jeffrey and Michael Briggs and Brian Barnhart; four great-grandchildren, Sara, Lacey, Jason, Zachary; two great-great-grandchildren, Jason, Madison, six great-great-great-grandchildren; and a sister, Martha Gayman. In addition to his parents, he was preceded in death by his first wife, Jean Welker (2001); daughter, Peggy Ebersole (2005); and a sister, Edna Myers (2017). The Funeral Service will be held Monday, February 19 at the W. F. Sellers Funeral Home at 1:30 PM with the Rev. Eloise Shanley officiating. There will be a viewing one hour prior to the service at the funeral home and burial will be in Parklawns Memorial Gardens. Military Honors by Charles Nitterhouse Post #1599 VFW Honor Guard. Memorial donations may be made to Cumberland Valley Animal Shelter, 5051 Letterkenny Road West, Chambersburg, PA 17202. Online condolences at Sellersfuneralhome.com To send flowers to the family or plant a tree in memory of Paul D. Robinson, please visit our Heartfelt Sympathies Store.

Paul D. Robinson, 98, passed away on Monday, February 12, 2018 at the VA in Martinsburg, WV. He was born July 14, 1919 in Shippensburg, the son of the late Cloyde D. and Ella (Rebuk) Robinson. He was a longtime member of the St. Paul Lutheran... View Obituary & Service Information

The family of Paul D. Robinson created this Life Tributes page to make it easy to share your memories.

Send flowers to the Robinson family.