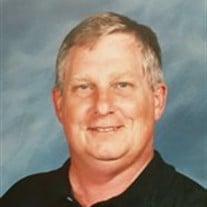 Robert “Bob” Lee Weagly Jr passed away on August 4th, 2016 at his home. He was born on November 8, 1949 to the late Betty Diehl Weagly & Robert Weagly Sr. Bob is survived by his wife Jamie Eason Weagly, son Dylan Weagly (wife Erin) of Mount Joy PA, step-son Erik Faust (wife Jennifer) of Goffstown NH, step-son Kevin Faust of Chambersburg PA, Grandsons Connor & Landon Weagly of Mount Joy PA, Brother David Weagly (wife Gloria) of Shippensburg PA, Nephew Matthew Weagly (wife Jennifer) of Chambersburg PA, and cousin Jan Weagly of Chambersburg PA. He is preceded in death by his mother Betty Diehl Weagly, father Robert Weagly Sr, and aunt Jean Weagly. Bob spent most of his life as a musician. He was an advanced trumpet player even as a teenager and earned many opportunities to perform in select musical groups, such as the Phil Young Orchestra. Through the years he shared his talents & knowledge as a musical consultant. He worked locally with the Greencastle Antrim H.S. marching band, James Buchanan H.S. marching band, Chambersburg Montessori, plus many regional drum corps & majorette troupes. He also played in many local bands, most recently the Mercersburg Area Community Band. One of the highlights of his career was the time he spent as an instructor in the 1970’s with the Troopers Drum & Bugle Corp of Casper Wyoming. In later years he enjoyed consulting within the DCI community. Then for nearly the past 15 years he owned a music store and taught music lessons in the Chambersburg area. Bob will be missed by many, while he always had a tough exterior, he also had a strong Christian faith and a huge passion for helping people in need. He spent time teaching children with special needs how to play an instrument, helping people lost in drug addiction find the path to recovery, or simply lending an ear and giving advice to a friend or family member. Bob recently wrote, in his own words “I say that the lesson death teaches us, is to make the most of every minute and of every human interaction given to us. Even with all of our knowledge, we still do not know what this thing called life is. Yet, we do know that each of us has the power to shape it. Use your power to its best, for that is all one can do. Celebrate life and one another. I wish peace, love, and happiness to all.” In the true spirit of Bob, his family requests that, in lieu of flowers, donations be made to Teen Challenge International (a faith-based addiction treatment center in Rehrersburg PA) to help other people in need. These donations can be made by visiting www.teenchallengetc.com/donate-online. To send flowers to the family or plant a tree in memory of Robert Lee Weagly Jr., please visit our Heartfelt Sympathies Store.

The family of Robert Lee Weagly Jr. created this Life Tributes page to make it easy to share your memories.

Send flowers to the Weagly family.