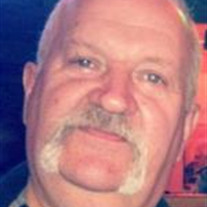 Roger Allen Lehman, 58, of Marion passed from this life 11:23 a.m. on October 24, 2013 at the home he loved, surrounded by loved ones, after a courageous battle with esophageal cancer. With his brother, Rodney, they owned and operated Lehmans’s Brother’s Mail Haulers’s until the 80’s. He was later leased to Daily Enterprises as an owner/operator hauling heavy equipment until 1984. Following this, he was employed by Lisa Motor Lines, Ft. Worth, Texas, transporting meat until 1989. Employed by Oliver Oil Co./ Shipley Oil as a petroleum transporter, from 1989-2009, he last hauled U.S. Mail from 2010 until retiring on disability in February of 2013. Roger was a member of the Chambersburg Club. He was an avid Dallas Cowboys fan and loved riding his Harley Davidson. Roger is survived by his wife: Angela (Latshaw) Lehman; father, Harold F. Lehman; mother, Janet (Love) Lehman, all of Chambersburg; two daughters: Casey R. and Taylor E. Lehman, of Marion, a step-son, Michael L. Martin; brother, Rodney Lee (husband of Janine Sanders) Lehman, niece, Allison Lehman and his beloved dog, Nickey. He was preceded in death by his grandparents: Samuel and Rhoda Lehman. The funeral service will be at 11:00 a.m. on Wednesday, October, 30, 2013 at the William F. Sellers Funeral Home with the Rev. Lester Stine Officiating. There will be a visitation from 6:00p.m. to 8:00 p.m. on Tuesday evening, October 29, 2013 at the funeral home. Burial will be in Norland Cemetery. To defray medical and burial expenses, contributions can be made to Casey and Taylor Lehman, c/o the Orrstown Bank, 1355 Orchard Dr., Chambersburg, PA 17201. Online condolences may be expressed at www.sellersfuneralhome.com To send flowers to the family or plant a tree in memory of Roger A. Lehman, please visit our Heartfelt Sympathies Store.

Roger Allen Lehman, 58, of Marion passed from this life 11:23 a.m. on October 24, 2013 at the home he loved, surrounded by loved ones, after a courageous battle with esophageal cancer. With his brother, Rodney, they owned and operated Lehmans&#8217;s... View Obituary & Service Information

The family of Roger A. Lehman created this Life Tributes page to make it easy to share your memories.

Send flowers to the Lehman family.