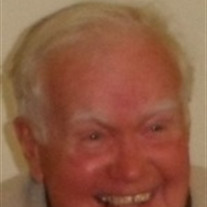 Ronald E. Morgan, age 80, of Chambersburg passed away on January 15, 2016. Born on August 4, 1935 in New Eagle, Pennsylvania, he was the son of the late Herbert and Edith(Voelker) Morgan. Ronald was a graduate of Mckeesport High School and California University of Pennsylvania, where he was a member of the basketball team. He spent one year teaching Industrial Arts in Dormont and spent 34 years teaching electric shop at Scotland School for veterans's Children, before retiring in the early 90's. He served in the U.S. Marines and Marine reserves from 1959 to 1965. Ronald was a long time member of the Academy of Model Aeronautics, where he participated in and later managed the national championships for almost 50 years.He had received virtually every award in the organization he was eligible for, as well as receiving a prestigious NAA award for contributions to aviation. He was also a member of the Vintage Radio Control Modeling Society as well as local model airplane clubs. His hobbies included building and flying radio controlled model airplanes, listening to and collecting 1940's big band records, building home electronics kits, HAM radio, traveling to Cape May and Wildwood, NJ, and any Disney Theme parks in the continental U.S. Ronald is survived by his wife of 48 years: Jane L Morgan (Nantais) of Scotland; one son: Karl E. Morgan; one daughter: Kathleen L. Kehr(Morgan) of Pittesburg, Pa; and three sisters: Jane L. Morgan, Chambersburg, Audrey Good(Morgan) wife of Gary of Mesa, Arizona and Laura Chopp(Morgan), wife of Charles of Duccannon, Pa. A celebration of his life will be held at 1:30 pm on Saturday, January 30, 2016 in the chapel of the Presbyterian Church of Falling Springs. The Rev. Andrew Hart officiating. Visitation will be held after the service. A private burial will held at the convenience of the family. Memorial donations made be made to the Cumberland valley Animal Shelter, 5051 Letterkenny Road W., Chambersburg, Pennsylvania 17201 or IPF research c/o Penn State Hershey Medical Center, 500 University Drive, MCH 041, Hershey, Pennsylvania 17033. Please note in the memo "IPF Fund". Donations may also be made to a charity of choice. Online condolences may be expressed at www.sellersfuneralhome.com To send flowers to the family or plant a tree in memory of Ronald E. Morgan, please visit our Heartfelt Sympathies Store.

Ronald E. Morgan, age 80, of Chambersburg passed away on January 15, 2016. Born on August 4, 1935 in New Eagle, Pennsylvania, he was the son of the late Herbert and Edith(Voelker) Morgan. Ronald was a graduate of Mckeesport High School and California... View Obituary & Service Information

The family of Ronald E. Morgan created this Life Tributes page to make it easy to share your memories.

Ronald E. Morgan, age 80, of Chambersburg passed away on January...

Send flowers to the Morgan family.