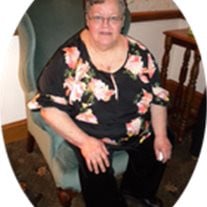 Sally Strock Grant, 68, of Chambersburg, PA., passed away Friday, February 6, 2015 at Falling Spring Nursing & Rehab Center following a brief illness. Born August 8, 1946 in Chambersburg, she was the daughter of the late Robert "Bob" and Margaret "Peg" Strock. She attended the Chambersburg High School and retired from Letterkenny Army Depot after 20 years as a Forklift Operator. She was last employed at Providence Place as a Cook for the past 11 years. She attended Unity in Christ Church in Chambersburg. Sally had both a passion and talent for cooking and writing poems. She enjoyed spending time with and cooking for her family and friends and went out of her way to help those in need. She is survived by her cousins Donnie Kauffman (Deb), Vickie Reed (Ron), Mike Claudy, Jackie Gaughan (Pete), Judy O'Meara, Lori McBeth (fiancé Dan), Lisa Wolfe (Gene) and their children. She will be very much missed by a special cousin, Lori Foltz McBeth, whom was like a daughter to her, and her children, Orlando and Deija McBeth. She is also survived by Hope Russell, who also was like a daughter to her. She was preceded in death by two aunts, Ruth Claudy and Jean Kauffman; two uncles; Charles "Hotty" Bowers and Jack Bowers; and two cousins Carol Bowers Foltz and Diane Bowers Szollose. A memorial service will be held at 3:30 p.m. on Sunday, February 15, 2015 at Unity in Christ Church, 4301 Philadelphia Avenue, Chambersburg, with Pastor Lois Waters officiating. The family will receive friends one hour prior to the service. Interment will be private and held at the convenience of the family. Memorial contributions may be made to Unity in Christ Church, 4301 Philadelphia Avenue, Chambersburg, PA 17201 or Providence Place, 2085 Wayne Road, Chambersburg, PA 17202.Online condolences may be expressed at www.sellersfuneralhome.com To send flowers to the family or plant a tree in memory of Sally J. Strock Grant, please visit our Heartfelt Sympathies Store.

The family of Sally J. Strock Grant created this Life Tributes page to make it easy to share your memories.