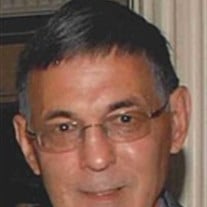 CHAMBERSBURG >> Stephen David Hersh, 71, of Chambersburg, died on Nov. 2, 2014, at home from pancreatic cancer less than two weeks after being diagnosed with the disease. Born on Nov. 4, 1942, in Brooklyn, N.Y., he was the son of the late Max and Eleanor Hersh. Steve received a bachelor's degree in business from The University of Maryland. After living for many years in the Washington, D.C., area and Rockville, Md., he moved to Chambersburg in 1980. Steve was a member of Congregation Sons of Israel, Chambersburg; and Beth Tikvah, Carlisle. He served in the U.S. Army Reserves during the Vietnam conflict. Prior to his retirement, he was employed as a supervisor at Occupational Services Inc., Chambersburg, for 23 years supervising groups of challenged adults in local factories and at the OSI sheltered workshop. He also took OSI clients on bus trips to Ocean City, Md., Washington, D.C., Baltimore Inner Harbor and other places of interest they may never have seen otherwise. An activist, Steve was a champion of justice and a warrior against hatred and bigotry. His passion was fighting hate groups and fighting for equal rights for all no matter their race, religion or sexual orientation. He served as president of Chambersburg United, the local chapter of a state unity coalition that fought hate groups. He spoke on hate groups and hate crimes at rallies and to groups, Steve became involved in that cause on the state and national levels and spent his retirement volunteering for the Pennsylvania Human Relations Commission in Harrisburg. He also belonged to and served on boards of several human rights organizations. He was an avid volunteer for the American Red Cross going to sites to assist people after fires, floods and other disasters. He manned the phone lines of the agency's national headquarters in Leesburg, Va., after a national weather disaster counseling individuals 1,000 miles away on what to do to remain safe. He was an avid follower of the news, politics and the weather. A great adventurer, Steve enjoyed travel, sightseeing, hiking and especially photography. A true family man, he cherished the times spent with his beloved children and grandchildren, especially the weeks the whole family spent together at the seashore. He and his wife, Iris, were married on April 1, 1989, and recently celebrated their 25th wedding anniversary. In addition to his wife, he is survived by two sons, Adam Hersh of Great Neck, N.Y., and Andrew Hersh and wife Maureen of West Windsor, N.J.; a stepson, Steven Lubart and wife Holly of Carlisle; and six grandchildren, Zachary, Sarah, Ben and Anna Hersh; and Alexis and Landon Lubart. The service will be at 9 a.m. Wednesday, November 5, 2014 in the William F. Sellers Funeral Home Inc., 297 Philadelphia Ave., Chambersburg, with Rabbi Robert Green and the Rev. Dr. William H. Harter officiating. Burial will be at Congregation Sons of Israel Cemetery, Lincoln Way East. Visitation will be a half hour prior to the service in the funeral home. In lieu of flowers, memorial donations may be made to the charity of your choice. To send flowers to the family or plant a tree in memory of Stephen David Hersh, please visit our Heartfelt Sympathies Store.

CHAMBERSBURG >> Stephen David Hersh, 71, of Chambersburg, died on Nov. 2, 2014, at home from pancreatic cancer less than two weeks after being diagnosed with the disease. Born on Nov. 4, 1942, in Brooklyn, N.Y., he was the son of the late Max... View Obituary & Service Information

The family of Stephen David Hersh created this Life Tributes page to make it easy to share your memories.

Send flowers to the Hersh family.