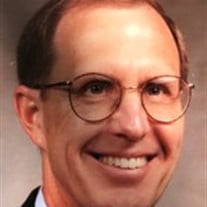 Dr. Ted Franklin Rabold met his Lord and Savior, Jesus Christ, on Friday, September 8, 2017 after a valiant 2 1/2 year cancer fight. He was the well-loved son of Frank C. and Louise B. Rabold, born in Bethlehem, PA in 1944. He was joyfully married to Bonnie A. Lindsell, in White Plains, New York in July, 1967. He and Bonnie met at Gettysburg College, Gettysburg, PA while students there, and celebrated their 50th wedding anniversary this summer. Dr. Rabold was a 1963 graduate of Liberty High School, Bethlehem,PA, a 1967 graduate of Gettysburg College where he was a varsity swimmer, active in student government, and a member of Phi Gamma Delta Fraternity. In 1969 he received his Masters in Elementary Education, and in 1978 his Doctorate in Education, from Lehigh University, Bethlehem PA. Dr. Rabold’s career passion was his work in public education. He started his 40 year career as a special education teacher, then elementary principal in Salisbury Township, Allentown, PA. He became an Assistant Superintendent in Tuscarora School District, Mercersburg, PA in 1979, and Superintendent there in 1981. He retired from Tuscarora School District in 1999. He returned to public education in 2001 to serve a five-year term at Chambersburg Area School District as Assistant Superintendent of Pupil Services under his longtime friend and colleague Dr. Ed Sponseller. Following his retirement from CASD in 2006, Dr. Ted served four years as an adjunct professor in education at Temple University, Capital Campus, Harrisburg, PA. Dr. Rabold was most proud of his beautiful family of three children, Brad L. Rabold (Heather) of Spring City, PA, Todd F. Rabold (Amy) of Winston-Salem, North Carolina, and Kye K. Holtry (Stephen) of Surfside Beach, South Carolina and eight grandchildren, Hannah and Emmy Rabold, Madison, Whitt, and Emerson Rabold, and Lexy, Briggs and Hamilton Holtry. He is survived by two brothers, James B. Rabold of Plymouth, Massachusetts, David C. Rabold of Coopersburg PA, and two sisters, Judith Nicholas of Gibsonia, PA and Roberta Stahr of Emmaus, PA. He counted David B. Lindsell as a brother and his wife Diane as a sister as well. Dr. Ted was a 33 year member of the Presbyterian Church of Falling Spring, Chambersburg, where he served God as an adult and junior high Sunday school teacher for many years, and as an elder and trustee. He felt called to serve God in the community as an active member of Rotary International, the Board of Directors of the Chambersburg Hospital, Keystone Health, and United Way of Franklin County. Ted enjoyed most of all spending time with his wife, Bonnie, and his growing family. He loved his couples Bible study of 35 years, reading, kayaking, working in his yard, and a mentoring others in their life journeys. He will be well remembered for his enthusiasm for life, his always optimistic, positive attitude, his love of the Lord, and ending conversations by saying "Make it a great day!" A celebration of Dr. Ted Rabold's life and faith will be held on Saturday, September 30, at 11 AM in the sanctuary of the Presbyterian Church of Falling Spring, 221 North Main Street, Chambersburg, PA with the Rev. Dr. Andrew Hart and Rev. Dr. William Harter officiating. The Rabold family respectfully requests no flowers, and instead memorial contributions to: SpiriTrust Lutheran Hospice Care, 2700 Luther Dr., Chambersburg, Summit Cancer Care, 22 St. Paul Drive, Chambersburg, or Network Ministries Phase 2 Building Fund, 10 Redwood St., Chambersburg PA. To send flowers to the family or plant a tree in memory of Ted F. Rabold, please visit our Heartfelt Sympathies Store.

Dr. Ted Franklin Rabold met his Lord and Savior, Jesus Christ, on Friday, September 8, 2017 after a valiant 2 1/2 year cancer fight. He was the well-loved son of Frank C. and Louise B. Rabold, born in Bethlehem, PA in 1944. He was joyfully... View Obituary & Service Information

The family of Ted F. Rabold created this Life Tributes page to make it easy to share your memories.

Send flowers to the Rabold family.