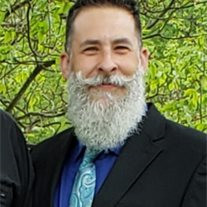 Timothy Alan Bowlin, 47, of Chambersburg, went home to our Lord and his beloved sister on Monday, Dec. 16 2019, in Lancaster. He was born the son of William E. Bowlin, Jr. and Shirley A. Wissinger Bowlin Sherry on Apr. 14, 2017, in Indiana. Tim graduated from Purchase Line High School in 1990. He is fondly remembered for his sparkling personality, his kindness and his friendship to all. He was also a graduating member of the first class of the Culinary Arts program of Indiana University of Pennsylvania, Punxsutawney campus. Tim excelled in restaurant management and loved cooking and putting on holiday sit down feasts for family and friends. His favorite passion was decorating and landscaping. He put these talents to work at New Light MCC Church, decorating the church for all seasons. Tim was also a member of the church and active in Hospitality Ministry. He was recently employed by Lowe’s of Chambersburg in the garden center and live nursery specialty, where customers appreciated and relied on his expertise and judgement. Tim was especially passionate about Christmas, going all out on decorating for it. Christmas music filled the house from the first of November to the first of January. He once had 24 trees decorated in his home. Tim opened his heart and made friends with everyone he met, making each one feel special. He will be sorely missed by all who knew him. Our world just became a little darker and heaven a little brighter. He is survived by his spouse and love of his life, Charles M. Keahey, whom he married on June 10, 2011; his loving mother and step-father, Shirley A. and Leonard Sherry; a sister, Cindy Rummell and husband Ralph; a brother-in-law, Leslie Wolfe; four nephews: Louis Cowan, Adam Cowan and wife Rachel, Joshua Cowan and wife Christina, David Wolfe and wife Crystal; a niece, Tashina Wolfe and fiancé Calvin Rebovich; 10 great nieces: Cassidy, Addison, Bridgette, Jewel-Leigh, Zoey, Lilly Jo, Meera, Ariya, Destiny, Kaitlyn; a great-nephew, Kristopher; numerous cousins and a multitude of friends, all of whom he loved very much. Tim was preceded in death by his father, William E. Bowlin, Jr.; a sister, Linda Wolfe; his cherished Gram, Ethel Bowlin; Pap, William E. Bowlin, Sr.; and maternal grandparents, Blaine A. and Mildred MaryEllen Cramer Wissinger. Friends and family will be received from 12 p.m. until the time of the funeral service at 2 p.m. Friday at Sellers Funeral Home with Pastor Deb Coggin officiating. In lieu of flowers/gifts, the family would sincerely appreciate memorial contributions to be put toward Tim’s funeral expenses.

Timothy Alan Bowlin, 47, of Chambersburg, went home to our Lord and his beloved sister on Monday, Dec. 16 2019, in Lancaster. He was born the son of William E. Bowlin, Jr. and Shirley A. Wissinger Bowlin Sherry on Apr. 14, 2017, in Indiana. Tim... View Obituary & Service Information

The family of Timothy A Bowlin created this Life Tributes page to make it easy to share your memories.

Timothy Alan Bowlin, 47, of Chambersburg, went home to our Lord...

Send flowers to the Bowlin family.